You are here: Home / Clean Up Crew / An Overview of the Sand-Sifting Conchs

Just as the floor is usually the dirtiest spot in the house, so is the substrate in most marine aquaria. As many aquarists who have dug their hand into a deep, mature sand bed can attest, an aquarium substrate can trap and store an enormous amount of particulate organic matter (POM). Not only is this waste material unsightly, but it also degrades water quality. As it is broken down by microbes within or over the surface of the substrate, various byproducts are produced. These byproducts may lead to nuisance algae outbreaks or even become toxic as they accumulate.

The accumulation of detritus in the sand or gravel bed of marine aquaria can be controlled with the smart use of sand-sifting organisms. These creatures (referred to as infaunal) spend most of their time under the surface of soft substrates such as sand or mud. These creatures tend to be deposit feeders. Some deposit feeders feed on piles of solid organics or algal films directly off of the surface of the seafloor; some actually probe the depths of the substrate for buried morsels. The movement and feeding activities of sand sifters hence turns over the sand bed, removing detritus and lending an overall “clean” look to the substrate surface. As such, sand-sifting animals form an important part of any aquarium clean-up crew.

There is a handful of infaunal snail groups that have been used for this purpose with generally great results. Some small snails such as Nassarius work well here (see An Overview of the Sand-Sifting Nassarius Snails). One may simply use a big number of these small snails to service larger aquarium systems. Additionally, those aquarists with sizable tanks (particularly with very deep sand beds) might consider including a few conchs.

Conchs (pronounced “konks”) are large, fast-growing marine snails that feed on detritus and 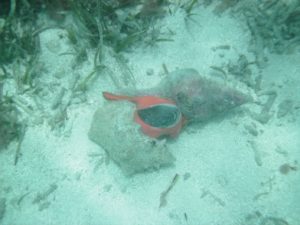 film algae on soft sea bottoms. They are most easily found in shallow beaches just below the low-tide line. Though adapted to a life beneath the sediments, these snails have very strong feet with which they can cling to hard surfaces. When moving above the substrate surface (particularly when threatened) they can move in odd “hopping” motions. Conchs often move into deeper and deeper waters as they grow, only returning the shallows to deposit eggs. Where food sources are abundant and of a high quality, some species of this voracious omnivore can grow from a minute larva to a quarter-pound individual in as little as one year. This extremely high rate of growth, however, decreases somewhat as the animal matures.

Conchs typically reach adulthood at approximately four years of age. The whorled, spindle-shaped shell is thick and heavy and may be covered with a horny layer (or periostracum). As the snail rapidly grows, its body mantle pushes against the shell. This causes the shell to flare out along the opening (or aperture). This permits the animal to slide along the flat seafloor with the shell opening positioned just over the substrate surface. While the outer surface of the shell is usually rather subdued in coloration, the inner surfaces (visible around the opening) can develop beautiful bright orange and pink hues. The characteristic spiral growth pattern of the conch shell includes numerous bumps and spikes along the outer surface. These projections are believed to confer some additional protection from predators. However, because their shell has such a large opening, conchs may nevertheless be vulnerable to attack by certain fishes (e.g. certain wrasses) or larger hermit crabs.

A good many of the “true” conchs are represented by the stromboids. This is a relatively small group of mainly tropical gastropods. Stromboid snails occur singly in sandy and rubble-strewn stretches near lagoons, estuaries or coral/rocky reefs. This includes the genus Strombus as well as the related Eustrombus, Lambis, Tibia and Varicospira. Stromboids usually bear large, distinctive eyes on long stalks. The eyes project from under the shell opening, with the left eye often fitted into a depression in the side. The eyes of Strombus and Lambis are especially well-developed.

In recent years, Strombus spp. snails have gained importance as aquarium animals. Not only can they be quite attractive and interesting to observe, but they also seem to be the ultimate sand sifter for larger systems. They prefer environments with large, open, deep, silty substrates. A long siphon (or proboscis) 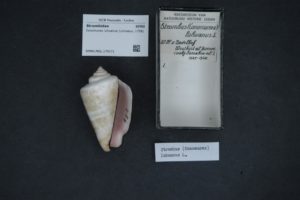 “smells” the surroundings as the animal forages for a meal. Growing to a respectable three or four inches in shell length, they seem to plow through the sand as they hungrily feed on detritus, algae and uneaten fish food.

Many aquarists have reported that they will even consume cyanobacteria. In fact, the tank bottom may become completely cleaned before their ravenous appetite is satisfied. It does seem that they do best in captivity when able to feed on some plant matter. If their heavy grazing outpaces the growth rate of benthic microalgae, or if other bottom feeders appear to be outcompeting them, the keeper might consider supplementing their diet on occasion. This can easily be accomplished with the addition of a few sinking algae pellets or wafers.

The tiger sand conch (Strombus sp.) is a popular conch. Hailing from the Eastern Pacific Ocean, this is an excellent addition to one’s clean-up crew. It spends a considerable amount of time cleaning and aerating the sand bed and might even disappear into the bottom for long periods of time (sometimes for months). Considered to be completely reef-safe, it is peaceful and usually does not irritate corals as it tends to stay on the tank bottom. This resilient sand sifter will not harm beneficial sand microfauna nor will it seriously disturb the bacterial microzones of the sand bed.

Indeed, it does not require a whole lot of these little bulldozers to leave a big, positive impact on the health and appearance of an aquarium substrate. And, even as they perform an enormously valuable duty as scavengers and sand sifters, they can be quite amusing to watch as they forage in and out of the sediments. Adaptable, hardy and benevolent towards its tankmates, the rewards of keeping this amazing creature are many.