Some fish require little introduction. Instantly recognized even by newbie fishkeepers and regarded as a high-value species by aquarists for decades, the purple tang (Zebrasoma xanthurum) could easily be designated as an all-time hobby fave. This popularity is largely, though not entirely, due to the rich purple body coloration for which it is so aptly named. The recent availability of captive-bred specimens from Biota surely will cement the elevated status of this beautiful creature far into the future.

This article celebrates this common yet highly desired species and takes a look at its captive care. 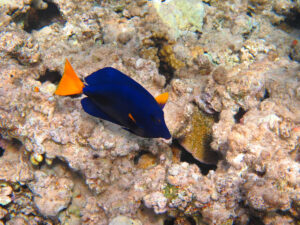 The purple tang (sometimes referred to as the yellowtail tang) is one of scores of handsome reef-associated species in the family Acanthuridae (the tangs and surgeonfishes). Once widely believed to be a Red Sea endemic, it is now known to occur also in the Persian Gulf, Gulf of Aden and Arabian Sea (perhaps to the Maldives and Sri Lanka). Nevertheless, its distribution is fairly restricted compared to many other reef fishes. Many aquarists will always think of it as a quintessential “Red Sea fish.”

In addition to its famous bluish-purple base color, it sports numerous black dots that can form straight horizontal lines across the flanks. In some examples, the lines are indistinct, whereas in some others they are well-defined as with the Kole’s tang (Ctenochaetus strigosus). Contrasting boldly with the violaceous body color is its bright yellow tail. In some cases, the margins of the pectoral fins express the same yellow.

The purple tang is not a particularly difficult species to maintain in aquaria. However, it may live for decades when afforded a great diet in an optimal environment.

This species is a grazer. It eats constantly in the wild. Given that, and its high activity level, its high caloric needs shouldn’t come as a surprise. While it will accept most aquarium foods, it is best offered a “veggie” based diet with frequent feedings of seaweed. The seaweed may be dried, but live macro from the planted refugium (ogo, sea lettuce, etc.) makes for a highly nutritious supplement. Generous offerings of “greens” will keep the animal plump and healthy (and perhaps protect it from the ravages of head and lateral line erosion). To the delight of reef aquarists, this fish is happy to consume any hair algae that might pop up.

Like other tangs, the purple tang is a very active swimmer. Any tank housing the species (especially adults) should be at least 120 gallons in volume–even more if much of the swimming space is displaced by live rock and corals. Some rock is appreciated, however, as purple tangs like to hide as they sleep at night. Some aquarists report that the species can get more aggressively territorial in the evening before settling down for the evening.

Captive-bred specimens are far easier to keep than wild ones. They adjust better to the cramped conditions in an aquarium (we’re not kidding here, they like elbow room). They are also more socialized for captive conditions, and so get along better with their tankmates; this being said, we do not recommend keeping this species with any other Zebrasoma fish (especially with its own species). Yet one more advantage of captive-bred purple tangs–like other tangs, this animal can easily have and spread external protozoan parasites (e.g. “marine ich”). Cultured specimens are far less likely to harbor these and other diseases and so offer tremendous peace of mind.

Take extra care when handling purple tangs to avoid their caudal spines. These are like tiny scalpels and definitely can cut you if you’re not cautious. And yeah, in some circumstances, when they feel threatened, they will actively attempt to slash you! When possible, catch and remove them with a specimen container or small pail instead of a net, as the spines can get stuck in and shred mesh materials.

The purple tang is an exceptionally attractive acanthurid. Those aquarists who are willing to drop a few extra bucks on this species will get an extra-flashy fish. Despite their somewhat decent availability, this regal fish always adds a touch of class to any tank. Those who are willing to drop just a couple more bucks to obtain a captive-bred specimen will enjoy the benefits of a fully tank-conditioned and almost certainly disease-free show fish.

Best of all, given a large living space and an algae-dominated diet, your purple tang may live for many, many long years!