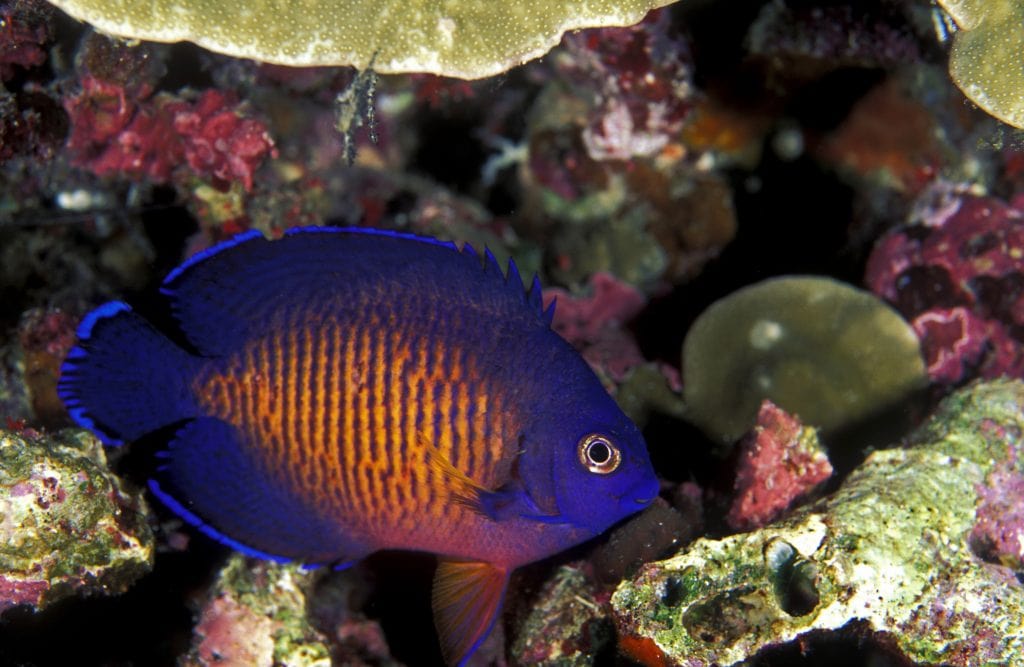 As someone who has worked with coral beauty angelfish in the aquarium industry for decades, I can say two things with certainty: (1) Beginning saltwater aquarium hobbyists should always start out with super-hardy fishes and (2) beginners are almost always obsessed with, and only want, color, color, and color.

While there are truly are many more joys to keeping aquarium fish than just looking at bright colors (observing interesting behaviors, for example), the fixation on color is understandable. Even veteran hobbyists love a pretty fish. But, when you have minimal experience keeping marine aquaria, selecting fish on the basis of appearance alone can be a recipe for disaster. Too often, a newbie will strut through the shop declaring that they want “a blue one, a red one…” and so on with little regard for compatibility much less their own ability to provide the expert husbandry required by many species.

Thankfully, the hardiest representatives of some fish families also happen to be among the most beautiful. Take, for example, the aptly-named coral beauty angelfish (Centropyge bispinosa).

Fairest of them all

Saltwater fish enthusiasts broadly declare this species as the comeliest of its kind, which really says something; not only is its family (Pomacanthidae) large and absolutely loaded with stunningly attractive representatives but also most of these species are readily available in the trade (at least if you’re willing to drop some serious coin). While as eye-catching as a fish can be, C. bispinosa is reasonably easy to maintain in captivity, especially when compared to many other members of its family.

To be clear, I’m not necessarily advocating that new hobbyists acquire this or any kind of angelfish during their first rounds of fish stocking. Angels, in general, rely heavily on a high-quality (and sometimes somewhat specialized) diet, they are susceptible to some nasty diseases, they can be jerks to their tankmates, and even nominally “reef-safe” species can exhibit a taste for some of your priciest corals. For these reasons and more, most experienced reefers would suggest that you first try your hand at far more sturdy and predictable types of fish such as gobies, blennies, etc. But, when you’re truly ready for your first angelfish, a BIOTA coral beauty is a great choice.

Let us just get that color part out of the way here; this fish is absolutely splendid. One of the coolest things about the species is its variability. This makes stock from each native population, and to some extent, even each individual, a little bit unique. But the basic coloration is undeniably impressive with a bright fiery orange-red base color. Purply blue markings cover the face and fins, breaking up into jagged vertical bands over the midsection. Neon blue highlights often cover the lips, ring the eyes and outline the fins. Despite the regularity with which it appears in the trade, few aquarists ever lose the sense of awe this animal inspires with its intense hues. 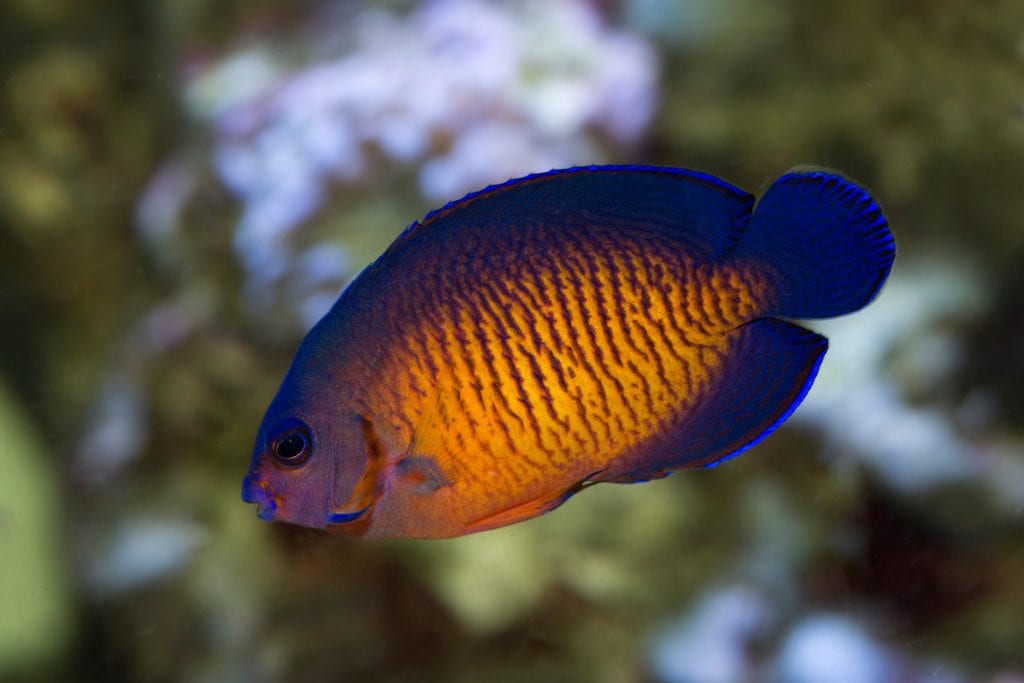 So many first-time reefkeepers might be pleased to learn that this species is one of the “toughest” angels. They might even be happier to hear that the species is now available as captive-bred. Yes, as is usually the case,

captive-bred coral beauty angels are hardier and adapt more easily to aquarium life. Not that wild coral beauties are particularly finicky eaters, but these are even easier to please and to keep healthy on a “normal” aquarium fish diet. More importantly, captive-bred individuals are comparatively far, far less likely to succumb to diseases such as marine ich. They are also more “socialized” and are thus less aggressive/territorial towards other fish in an aquarium environment. And yes, being raised entirely on aquarium foods, they are a bit more trustworthy in the presence of corals, clams, sponges, etc.

In actual fact, keeping a captive-bred coral beauty angelfish in captivity is pretty straightforward. As an omnivore, its preferred diet is one that is varied with a balance of meaty and plant-based items. On the meaty side, smaller bites like brine shrimp, mysis shrimp and cyclops are eagerly accepted. These fish can get their “greens” in a couple of different ways. For one, they tend to nibble at nuisance algae that might grow on the rocks and glass (a welcomed habit for sure). It’s also recommended to feed them tiny bits of macroalgae. An effective way to do this is to soften a small piece of dried algae in your fingers and mash it up, allowing the little flakes to drift into the water column where the angel will snarf them up one-by-one.

Even though this fish isn’t highly territorial, it certainly appreciates a familiar spot to call its own and that it can sleep in or retreat to when it feels threatened. Thus, it is best to make sure that there are enough little caves in the rockwork to satisfy all of the fish inhabitants, including the angel.

Also, in the interest of avoiding fights, it is best to acquire no more than a single coral beauty angel per tank. This fish does not get “lonely” for its own kind; to the contrary, it can get a little irate about having to compete with a conspecific within the tiny confines of an aquarium! Housing coral beauties together is more likely to result in a death than in an enduring friendship or romance.

And that’s about it! Most serious aquarists (whether experts or novices) have great odds of success with a coral beauty angelfish when kept in a healthy system–especially if it’s captive-bred–and get all the flashy colors one could hope for! With this as your first angelfish, the others will indeed have a very hard act to follow.