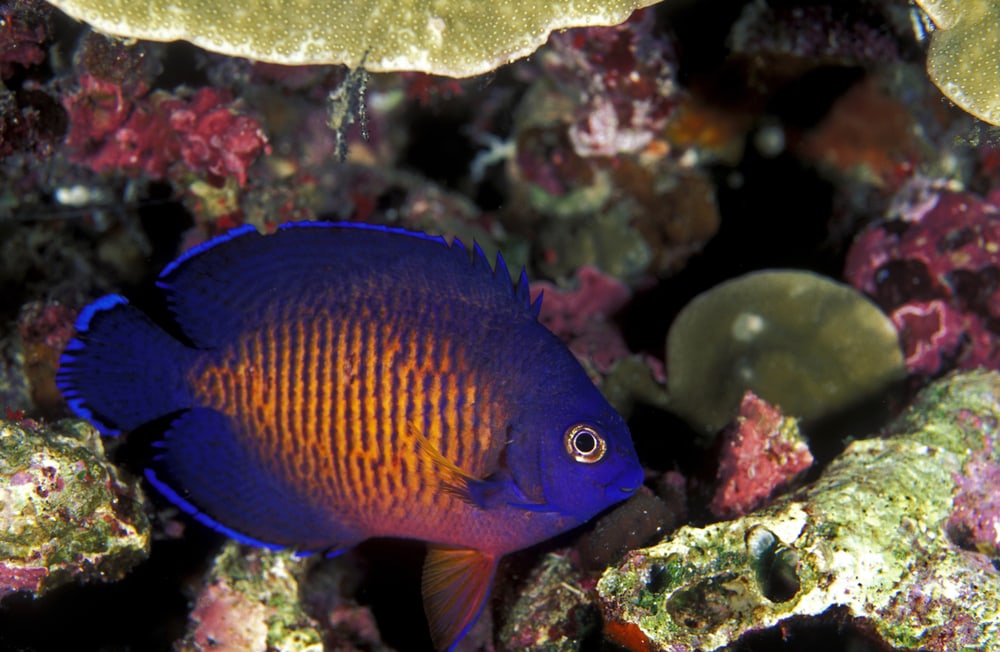 The angelfish family (Pomacanthidae) has some of the most elegant fish to exist. These fish, however, can be massive. For example, Queen angelfish can reach 17 inches, which is not something that is wanted in the average reef tank. The alternative to this is Dwarf angels. These are a smaller, less aggressive, and more manageable version of these beautiful fish that obtain the same color and elegance. There are many options of dwarf angelfish, but the most desired is the Coral Beauty. As it is said in its name, this fish is beautiful!

The Coral Beauty Angel (Centropyge bispinosa), also known as the dusky angelfish, is predominantly vibrant blue and deep purples. At a juvenile stage, it has more bright orange colors, but as it gets older it becomes bluer while the orange still exists, giving it a large contrast of bright colors. Blue and purple are colors that are hard to find on common saltwater fish, which makes the coral beauty seem even more exotic.

While these fish originate in the reefs of Indonesia and Fiji, they are now being captive bred, which gives hobbyists like you a higher chance at successfully keeping one of these magnificent fish. Like other captive bred fish, these Coral Beauties are less susceptible to diseases such as ich and marine velvet and they better adapt to aquarium life. The makes the fish more happy and comfortable living in reef and saltwater aquarium systems, while also making the hobbyist more happy knowing their fish was not stolen from the ocean and knowing that it will better thrive in their tank.

Generally, Coral Beauty angelfish are hardy and easy to care for, especially if it is captive bred. They will thrive in basic required tank parameters. Being an angelfish, the BIOTA Coral Beauty angelfish will graze on algae within the tank. That being said, if there is only a small amount of algae within the aquarium, they should be fed some sort of substitute for this algae to keep their diet balanced and healthy.

As for tank size, they can be in a 50-gallon system when they are smaller, but it would best if they are in at least a 70-gallon system as they grow. That way they will have plenty of swimming room. It is also important to make sure that you have plenty of rock with hiding spots so that they are more comfortable in your tank.

Things to watch out for

You may be thinking that you would like to have both a Flame Angel and a Coral Beauty in your aquarium. This seems as though it would be great, but it plainly is not. There are few exceptions where two Dwarf angelfish have lived in an aquarium in harmony. Unless you have a very large tank, it is extremely unlikely that things would work out. So when it comes to putting angelfish in your reef tank, it is best to stick with the Coral Beauty Angelfish.

Another thing that is commonly known for all Dwarf angelfish is that they may nip corals. Some are more prone to do it than others, but it is generally a chance form fish to fish. Out of all the Dwarf angels, the Coral Beauty is most known to leave corals alone. Then again, you can never be for sure. Some may claim that they will only go after specific coral. In this case, it is best to closely observe the fish day to day and make decisions on whether it needs to be removed or not. One thing you could do to avoid your Coral Beauty form becoming a coral nipper is to make sure they are properly fed.

That’s it! Head here to purchase your own captive-bred Coral Beauty.