As years go by, more and more fish in this industry have been successfully captive bred, by incredible companies such as BIOTA . This is not only great for conserving stock in our oceans but also for hobbyists that have always wanted a specific fish but never got it due to its trouble acclimating to life in captivity. We here provide a list of fish that are now captive bred and will thrive in your aquarium.

I’m going to start with the most sought after fish in this hobby that is also notorious for being hard to keep. The mandarin goby is an incredibly popular captive bred fish, whether it is the psychedelic or green spot, is one of 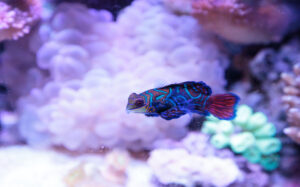 the most beautiful fish in this hobby. They have some of the most intricate patterns and are a great addition to any reef tank. They have always been known for being one of the most difficult fish to keep due to their need for tiny live food items such as copepods.

Most wild caught mandarins do not eat prepared foods and will only accept live food. Luckily, now that these guys are bred in captivity, they will readily eat frozen food and even pellets. This makes taking care of them much easier and takes that stress away from making sure they are getting enough food. Although they are bred in captivity, that does not change their need to constantly scavenge for food so it is still required to have a consistent supply of copepods in your aquarium. Mandarin gobies reach around four inches in length and require a minimum tank size of 30 gallons. Setting up a refugium with a supply of macroalgae creates a perfect setting for your copepods to breed which will keep a constant supply of food for your mandarin. 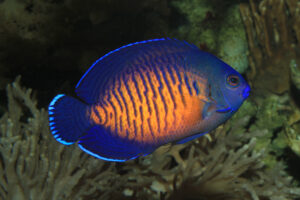 This next fish also offers a beautiful array of colors for your aquarium. The coral beauty angel has a bright purple body with an orange and yellow belly.  It has a mild temperament and gets along well with other peaceful saltwater fish. The only exception here is keeping them with their own kind; you should have only one coral beauty per aquarium. They tend to become territorial towards one another and having more than one in a tank can lead to fighting.

Coral beauties reach around four inches in length and require a minimum tank size of 30 gallons. They are omnivores and can easily be trained to accept flakes and pellets. Most places that breed these fish will usually raise them up on prepared foods to make it much easier to feed them once they are introduced to your aquarium. Although they are omnivorous, algae is a major component of their diet and fresh seaweed daily is appreciated. You will notice them occasionally picking at your rock structure feeding off of any algae they find. They are considered to be “reef safe with caution” because they may occasionally pick at coral in your tank. It is best to keep an eye on your coral beauties when they are first added to the aquarium. Keeping them well fed can help to steer them away from picking at coral.

The forktail blenny is unusual among its blennioid cousins in that it has a functional swim bladder. You might see this fish darting around the mid-column in your aquarium unlike most blennies which usually hang out on the bottom

or stay perched on the rock structure. Captive bred fish like the Forktail blennies are very docile in nature and can get along well in groups of one male to many females (a harem). However, if you decide to have just one in your tank, they reach up to four inches in length and require a minimum tank size of 20 gallons. If you plan on having a group of them, it is best to have at least a 75 gallon aquarium to give them plenty of swimming space and places to hide.

Forktail blennies are not very picky eaters and thrive on an omnivorous diet. They too are easily trained on flakes and pellets which can make feeding that much easier. However, these guys should be handled with care due to the fact that they have a mild venom in their fang-like teeth. While they won’t approach you and bite, it is still best to stay aware to avoid cornering them while performing aquarium maintenance.

The captive bred fish such as the court jester goby (also known as Rainford’s goby) has a stunning coloration with a green and orange striped body with black and white spots. It stays fairly small, maxing out at only three inches in length. This species works very well in nano or standard size aquariums with the minimum tank size being 10 gallons.

Court jester gobies are known for picking at algae in the aquarium and have also been one of the few fish seen eating cyanobacteria. This is a huge deal as most invertebrates and fish avoid cyanobacteria and have no interest in eating it. Although they eat algae in the aquarium, they will thrive on an omnivorous diet and can effortlessly be trained on flakes and pellets.

One important thing to note is that these guys can be very shy when first added to the aquarium which can make them targets for larger, more aggressive tankmates. It, therefore, is best to keep an eye on your goby when it is first added to the tank to make sure no one is picking on it. It may take a few days for it to come out of hiding as it is probably finding the best place to claim as its territory in the aquarium.

Court jester gobies may be kept in small groups in larger aquariums. They are very social fish; once they become more comfortable with their surroundings, they can have a huge personality and become one of the most active fish in the tank.