You are here: Home / Beginners Education / What Clownfish Is Best For My Aquarium?

There are many different species of clownfish to choose from! Some look very different from others. Some are hardier than others. And, some are more docile than others. I am going to be discussing the top four species in this hobby and which one might be best for your aquarium. 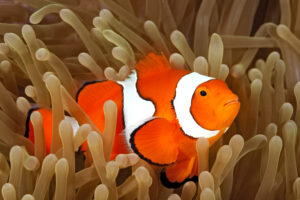 The most popular clown in the aquarium fish trade is the ocellaris clownfish (Amphiprion ocellaris). They stay fairly small compared to other species and also have a mild temperament. Ocellaris clownfish reach up to 4 inches in size and come in dozens upon dozens of pattern and color combinations. Most of the “designer” clownfish you will see in aquariums all originated from a standard ocellaris. Due to being bred in captivity, this is how we can get these stunning patterns out of them. They can take quite awhile to host anemones, depending on how long that line has been bred in captivity. They tend to lose some of their instinct to host but some will take right on to hosting. These guys are omnivores and it is easy to train them on flakes and pellets.

The next clownfish on this list is the maroon clownfish (Premnas biaculeatus). These guys are nearly the complete opposite of the ocellaris in every way. Maroon clowns can reach up to 6 inches in size and can carry quite an attitude. They are very well-known for being one of the most aggressive clownfish in this hobby and it tends to steer many people away from them. However, these guys will usually instantly host anemones. So if you’re looking for a clownfish that will immediately take to an anemone, maroon clownfish are the ones to choose. Maroon clowns come in a variety of patterns with the most popular one being the “Lightning Maroon.” Lightning Maroons are considered the designers of maroons and have a stunning look to them. One thing to keep in mind with these guys is that pairing them can be particularly tricky. You will either want to make sure you get them both as babies or get one that is fairly larger than the other. The reason this can cause issues is because if you have a sexually mature female maroon, she might not take on a partner easily. Maroons are very territorial and it is a very delicate process getting two to pair if you have one that is already sexually mature. That is why the best way to pair with one already sexually mature clownfish is to get one that is still a juvenile which will automatically make it the submissive one of the two, making pairing much easier. These guys also are omnivores and will eat flakes or pellets easily.

Clownfish number three is going to be the clarkii clownfish (Amphiprion clarkii). These guys can max out at 6 inches. Clarkiis are one of the largest clownfish along with maroons and can also match the same attitude as them. It is very easy to get them to associate with anemones (they are actually the only clownfish that can host all ten types of symbiotic sea anemones). Another plus with these guys is that even if they are paired with an anemone they will still venture throughout your entire tank. Some clownfish such as ocelllaris will only stay in the same area as their anemone majority of the time while Clarkii’s still love to explore their surroundings. Pairing clarkiis is the same process as pairing will be with maroons; you want to use caution when introducing a sexually mature clownfish to a new mate. You’ll want to take your time to introduce them to a new mate and ensure it will be the best fit for your adult. Or you could even get both clarkiis at the same time as juveniles so they can grow and mature together making it an easier process. They have an omnivore diet and are easy to train on flakes and pellets. I would recommend a minimum of a 30 gallon tank for these guys due to their maximum size. 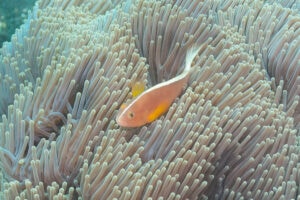 This last clownfish, the the pink skunk clownfish (Amphiprion perideraion) is very underrated. They stay small much like the ocellaris, maxing out at 4 inches while also exhibiting a docile temperament. You will rarely see any aggression that comes from these guys. They don’t have that typical “clownfish” look. Their body shape is more narrow and they lack dramatic dorsal fins. They are solid pink with a white stripe going all the way down the top of their body and white stripes along their cheeks. These guys will almost instantly find something to host in your aquarium, even if it isn’t an anemone. I’ve had skunk clown’s host leather corals, gonioporas and even green star polyps! The only negative effect of your clownfish hosting a coral is that it may actually irritate your coral and cause it to close up. So, finding an anemone for these guys may be recommended just to keep them out of your coral. As much as they love snuggling the coral, the coral itself doesn’t always appreciate it. I’ve personally had success keeping a large group of pink skunk clownfish in an aquarium with a 12 inch bubble tip and they all got along, with each of them taking part of the anemone for themselves. When it comes to having a group of clownfish in a large aquarium, skunk clowns are probably the safest bet. You just want to ensure that each fish either has its own anemone or that the anemones are large enough for them to share. You may get aggression out of the dominant skunk clown in the tank who will always keep the others in check; still, when it comes to grouping, these guys are the easiest to work with.