In honor of conservation week, we are talking about how we can take action for our oceans. The efforts we make as hobbyists can have big impacts on protecting natural marine resources. And there are so many ways we can all contribute to this effort both on our own and on a larger scale.

So, this post is going to be focused on what every reef keeper wants – frags! Fragging coral is not just about stocking our reef tanks, it’s bigger than that. Cutting frags is one of the most reliable methods we use to repopulate and conserve natural coral reefs. So, let’s get ready to talk about anything you possibly wanted to know about frags.

Most of us have seen small pieces of coral sold at the LFS and at many reefing events we lovingly refer to as, frag swaps. Frag is just an abbreviation for the term fragment. It’s referring to a fragment of a coral colony that is being cut or broken off. Propagation by fragmentation is one of the methods corals use to reproduce. When we are cutting a coral frag, we are essentially cloning that coral colony. 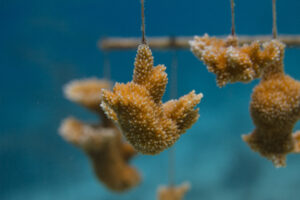 In nature, corals experience spontaneous fragging in natural ways such as rough seas, tsunamis, or earthquakes. When events such as these take place, the fragments will become spread across a reef. This is one of the ways coral reefs expand and grow in nature. In other cases, corals can be broken into frags when damaged by boat traffic or debris. Sadly, the majority of these frags will be so badly damaged the coral will fail to recover.

How long does it take to grow a coral frag?

Some coral frags grow slowly in a reef tank while others flourish. Coral growth rates depend on a few factors. A coral frag takes a few weeks to establish itself, we typically say a frag has healed when the tissue has grown over the cut. Growth rates will also vary depending on the species. And looks can also be deceiving! Just because a coral looks like it’s had a growth spurt, doesn’t mean the calcerous skeleton has grown. LPS corals are notorious for this! Euphyllia sp. are known to appear larger once the polyps have inflated. 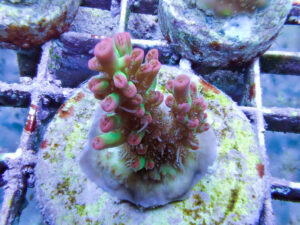 Some branching Montipora and Acropora corals can grow up to eight inches per year in a reef tank under ideal conditions. Larger coral colonies, on the other hand, can grow at a rate of less than an inch per year. Oftentimes, soft corals will grow more quickly than stony corals.

Water movement can have a variety of effects on coral growth. Because corals cannot actively generate water movement, they rely on water flow to meet basic needs and provide nutrients. However, coral growth will be most affected by the water parameters and lighting.

What type of coral can be fragged?

Any healthy coral can be fragged, and many will frag themselves in captivity. Some soft corals like mushrooms will release polyps or relocate in the reef tank and leave a fragment of tissue. Soft corals like Xenia can grow so quickly that fragging is necessary to keep them from encroaching onto other corals.

The most important thing to remember is that some corals can release toxins and should be handled with caution. Please don’t let that deter you from keeping corals like Leathers, Zoanthids, or Palythoa. Just remember to use caution when handling these corals or servicing the reef tank. 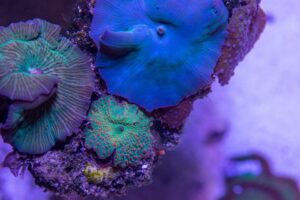 LPS are a reef keeping staple due to their brilliant colors and flowy movements. Many LPS are not aggressive to neighboring corals and have low demands. This makes them excellent candidates for the reef tank. However, LPS are among the most difficult corals to frag. In fact, some LPS species like Scolymia, Acanthophyllia, and Trachyphyllia can’t be fragged at all. These corals are known as single polyp species and many of them reproduce sexually.

SPS coral species tend to be among the easiest to frag. Branching corals such as those in the Acropora family tend separate without much damage to either the clone or the mother. Plating SPS corals such as Cyphastrea and Montipora are known to have such thin skeleton tissue they can easily snap under gentle pressure. However, this can be so traumatic to the delicate tissue that the frag and sometimes the mother colony might not recover. Surgical gear such as bone cutters are the perfect tools for making clean cuts of thin, brittle branches of coral tissue.

The simplest answer can be summed up to supply and demand. To elaborate, a robust market of captive grown coral reduces the demand for wild harvested corals. Our mission at AlgaeBarn is to see aquaculture facilities grow and frag coral at rates that exceeds the demand for wild collection. And today, reef keepers are getting closer to that goal with your support! 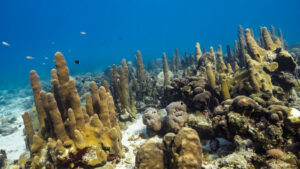 Another way fragging helps to restore coral reefs is through ex-situ conservation and specimen outplant. Many restoration groups are working to preserve the coral reefs of the Florida Reef Tract. These organizations work to investigate the challenges that coral reefs face. They conduct research and develop programs to encourage citizens to actively participate in these efforts. Events such as beach cleanups, dives, and reef monitoring trips all help to bring awareness to the community.

Mote Marine Laboratory has a proven track record of success in restoring the Florida Reef Tract. Mote’s programs include the planting of thousands of frags each year. In response to the outbreak of Stony Coral Tissue Loss Disease (SCTLD), Mote has doubled their efforts of response and restoration. A coral with SCTLD has a decline similar to what reef keepers call RTN. And their initiatives will replenish the Florida Reef Tract with over 1 million corals. 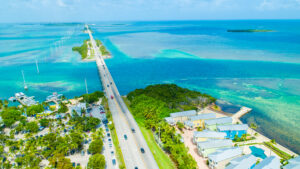 Mote is currently working on a 10-year agenda called the Florida Keys Coral Disease Response & Restoration Strategic Initiative. The program catalogs coral genetic strains with increased resiliency to an increasingly hostile environment. Fluctuations in water temperatures, rising seawater acidity, and coral disease are just a few of the battles on the horizon for our reefs. Monitoring the state of coral reefs is a big part of the initiative to assess the survival of Florida’s Reef Tract. But it also gives researchers a look into the health of the entire ecosystem.

In 2021, Mote partnered to create a land-based coral nursery near Bud ‘N Mary’s Marina in Islamorada. They are also in the process of building another coral nursery in Key Largo. The combined capacity of the two nurseries is 40,000 coral frags. That is a potential 40,000 pieces of the most endangered coral on the planet ready to reintroduce to the reef! Since this initiative began, Mote has facilitated over 173,000 frags of coral outplants restored to the Florida Reef Tract.

The way this process of using land-based coral nurseries to grow coral outplants is just like how we would create a frag system. After a lengthy quarantine process, the mother colonies are placed into separate systems for observation. Since many of these corals are already at risk of developing SCTLD, they are monitored closely for any signs of infection. Unfortunately, the exact cause of SCTLD is unknown so there is no effective treatment yet.

Once the mother colonies are confirmed to be in good health, the frags are cut and moved into other systems in the nursery. Since Mote has several facilities across the state, the frags can then be moved to other facilities to grow out. 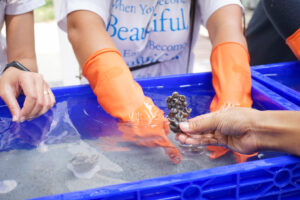 The next phase of the restoration effort is critical because frags are transported from nurseries and secured back onto coral reefs. This phase can also be the most expensive and labor-intensive part of the restoration for several reasons. Due to the long hours, large numbers of divers and boat operators, the outplant has a lot of moving parts. But the success makes it all worthwhile. About 90% of these outplants survive past the critical one-year mark.

We hope this article has helped to bring awareness to the efforts to repopulate and conserve natural coral reefs. As reef keepers, we rely on coral frags to populate our reef tank systems with new species. But as we said above, fragging is a method that is effective in coral reef recovery programs.

Coral restoration in the Florida Reef Tract is a massive effort. Mote Marine Laboratory has a proven track record of success in restoring coral reefs. Mote has doubled their efforts in response to SCTLD and aims to foster the survival of Florida’s Reef Tract.

Be sure to check back throughout the week as we continue to celebrate conservation week!