If you have even worked at the retail or wholesale end of the aquarium fish industry–even for just a week–you are probably keenly aware of the threats posed by viral, bacterial, and especially parasitic diseases. Between fish collectors, breeders, distributors, stores, etc., your new fish may have crossed paths with hundreds or even thousands of stressed-out specimens from all over the globe. Often sharing space in enormous holding systems. Sometimes under less than ideal conditions. Duh… It’s no wonder that those few weeks prior to an aquarium fish’s final sale (i.e. to the hobbyist) are the most dangerous in terms of these risks. It may have diseases that not only can kill it, but that also can kill any/all of your fishes; this is why quarantine (QT) is so critical not just for the health of new acquisitions, but for your entire collection.

As we all know, some fish species/families (e.g. mandarin fishes) tend to be more resistant to disease than others. For this reason, it may be tempting to forego the quarantine process in seemingly “low-risk” species. That is a mistake. Just because a fish may not tend to die from a particular disease does not mean that it cannot carry it. Moreover, while pathogens may not be evident on the animal’s body, they nevertheless may be present in the bag water. Therefore, all animals should be quarantined before introduction into the main tank.

So, yes, even though the mandarin fishes do not often express disease in captivity, it should be quarantined. And while captive-bred specimens are by far hardier and have likely been exposed to far fewer tankmates than wild specimens, we recommend that all mandarins be kept in quarantine for at least a few weeks before you put them into your display. 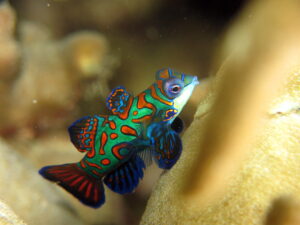 Let’s back up just a bit. It very likely was the amazing colors and patterns of this fish that first attracted you to the species. And those colors and patterns are indeed striking. But they didn’t evolve to impress aquarists; rather, they are aposematic. That is, they are used to warn predators of their nasty slime. Not only does this fish produce a very bad-tasting substance in its slime, but its skin also releases a mildly toxic compound. Does its gnarly slime deter parasites? Some people claim as much, but this hasn’t actually been proven. Whether or not this is the case, mandarins do seem to be fairly resistant to parasites. That all being said, pathogens present a threat either by using the mandarin as a carrier or by hitchhiking in the transport water. Plus, mandarins are just as vulnerable to bacterial infections (from body scrapes, torn fins, etc.) as are any other fish.

Yup, that means quarantine. Mandarins are not very big, nor are they particularly active, so they don’t necessarily require a huge quarantine system. However, a larger QT tank will potentially supply a larger number of copepods. And if you’ve done even half your homework yet, you already know where this is going.

The one big challenge with mandarins relates to diet and feeding. Specifically, the bulk of their natural diet consists of tiny crustaceans (mainly copepods). Even in captivity, they very strongly prefer their natural food source. Even if they do accept other food items, they need to constantly feed (all day, in fact), taking many teeny bites throughout the daylight hours. This makes the availability of live copepods necessary for their survival–in quarantine as well as in the display. This adds another, critical level of preparation when establishing a QT tank in anticipation of a new mandarin.

Laying out the table

While in quarantine, your new mandarin will be stressed and likely will refuse all food except for its preferred live fare. Thus, the QT should be absolutely teeming with pods before the mandarin is even purchased. Establishing a big pod population is not difficult (when done right), but may nevertheless be frustrating for some hobbyists because of the amount of time it often requires.

For those who want to do this part right, and fast, there are some steps that make things a whole lot easier. Specifically, you should: 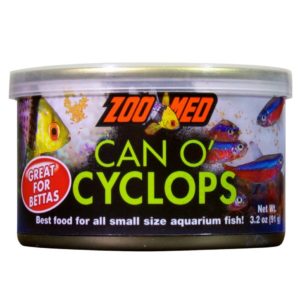 It’s worth elaborating on that last piece a bit further. For an animal that is used to eating constantly, your mandarin will be absolutely starving when it finally arrives. A boost of copepods will assist it in finding/capturing food, plus it will help to offset the big dent in the pod population that will occur as soon as this predator enters the tank. But the above-mentioned kit also contains baby brine shrimp (Nano Brine), which provide an especially good opportunity for the newcomer to fill its gut and get off to a healthy start on Day One. The Can O’ Cyclops included in the kit helps you to start training them to accept supplemental prepared foods right away.

Be aware that medications used in the QT may be detrimental to health/reproduction of your copepods. Thus, when using any kind of medication, be extra watchful of pod numbers and be ready to acquire/add more pods (and perhaps brine shrimp) if you see the population collapse. You may want to give some daphnia a shot as well!

Finally, you must also be sure that the main tank is crawling with pods! If you’ve quarantined mandarin fishes for at least three weeks and it has been eating like a champ, and your main tank is loaded with copepods, you have a low chance of introducing a disease and a great chance of success overall.