You are here: Home / Captive Bred Fish / Filefish / An Overview of the Filefishes

In the Age of the Reef Tank, many cool (but not reef-safe) saltwater fish families that were once extremely population are now relative rarities. One such group, for sure, is the filefishes. This is too bad, as filefish are intelligent and possess abundant character. They are also quite “marine” in appearance and behavior; even the average non-aquarist can guess from a glance that these strange creatures are an “ocean fish.”

This article provides an overview of the group and highlights a few species, including one that is mostly reef-safe.

The tetraodontiformes (or the Plectognathi) are considered to be among the most highly advanced bony fishes. This group includes some well-known (and well-loved) aquarium fishes such as the pufferfish, boxfish, porcupinefish, triggerfish and filefish. The family Balistidae once included both the triggerfishes and the filefishes. Both have a distinctive rhomboid body shape (when you really look at them closely, files just look like vertically compressed triggers). Also, both have long, tapered snouts with terminal mouths and large dorsal and pelvic spines. Files are, however, known to be a bit more peaceful than the infamously vicious triggers. 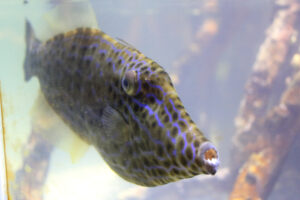 Filefishes get their name from their rough, sandpapery skin; the roughness comes from non-overlapping scales with small spikes. One notable physical trait among the filefishes is their “dewlap” of skin (created in part by the elongated pelvic bones) which runs between the pelvic fin (more accurately, the pelvic rudiment) and the belly. As the pelvis is articulated with other bones of the pelvic girdle, the fish is capable of folding and unfolding the dewlap; when unfolded, the fish appears much deeper in the body than is actually the case, fooling competitors and predators.

The filefishes are now placed into their own family, Monacanthidae, and are alternately known as leatherjackets, shingles and foolfish. The Monacanthidae include around 102 species in 27 genera. All are tropical or subtropical. They typically prefer shallow waters (under 30 meters depth) but occur in a wide variety of habitats including coral reefs, seaweed and seagrass beds, sand/rubble flats, estuaries and even large drifting masses of sargassum.

Files also vary greatly between species in terms of diet; most could be best described as extremely opportunistic omnivores that potentially may nibble at anything. However, some are strictly vegetarian, some have a more “standard” carnivorous diet of things like sponges, worms and small crustaceans, while some are specialized to feed on corals.

The above mentioned taste for corals (at least by many filefish species) is precisely what keeps so many monacanthids out of conventional reef aquaria. Frustratingly, some files (such as the exceptionally beautiful orange spotted filefish (Oxymonacanthus longirostris)) cannot be kept in FOWLR tanks either because they pretty much only eat coral.

Some files are reasonably well-suited for aquarium, but require extremely large tanks. The scrawled filefish (Aluterus scriptus), which is perhaps the largest of all the monacanthids, is occasionally imported for the aquarium trade despite reaching an adult length of 110 cm (43 in). 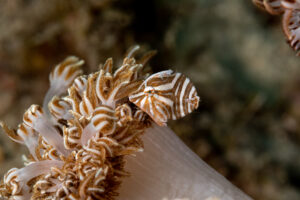 Some species, while not suited for a reef tank, are nevertheless suitable for a reef system–if kept in the refugium. The whitespotted pygmy filefish (Rudarius ercodes), for example, reaches only a modest adult size of just a few inches and is adapted to living in patches of macroalgae.

The aiptasia-eating filefish (Acreichthys tomentosus) is very similar to the above species, but carries the slightly less prohibitive “reef-safe with caution” designation. While these guys reportedly can cause occasional “trouble” in reef tanks, their habit of eating Aiptasia spp. pest anemones (as you’d deduce from their common name) makes the risk worthwhile in some situations. While generally reef-safe, one should exercise extra-extra caution when keeping them around clams and/or small shrimp.

The radial filefish (Acreichthys radiatus) is quite similar to its close relative above. While it is perhaps a bit more attractive in terms of coloration and pattern, it is entirely unsuitable for reef tanks. That being said, its relatively small adult size of a few inches length makes it an awesome candidate for a modestly sized FOWLR tank (maybe with some Xenia, in which it hides).

The tasseled filefish (Chaetodermis penicilligerus) is a fantastic choice for many bigger FOWLR tanks. This species may be drab in color but still gets attention with its “filaments; these well-developed extensions serve to break up its outline as to help hide it from competitors, predators and prey. Though some files are not particularly brightly colored, they are nevertheless eye-catching due to their fascinating ability to change colors to better blend in with their surroundings; this species, a master of camouflage, is a great example here.

Filefish are not exactly agile. Nor are they very fast. Therefore, they rely entirely on their ability to blend into their surroundings for protection. Not a great strategy, right? That’s why they are always ready to dash headfirst into the coral branches or rock craveasses and lock in with their strong pelvic bone (similarly to triggers). Because they can understandably be a bit skittish, it is best to help them feel comfortable by providing lots of cover in the form of branchy structures, caves, overhangs, etc. throughout the hardscape.

Let it be reiterated here that no filefish can be trusted in a reef tank. These are excellent, however, for a fish-only community with similarly sized tankmates. Kept in the right place with the right company, filefish are sure to please any keeper with their quirky personalities and general ease of care. Easiest to care for are aquacultured specimens; fortunately, Rudarius ercodes, Acreichthys tomentosus and Acreichthys radiatus are all available as captive-bred!