You are here: Home / Our Oceans / International Whale Shark Day

August 30th is International Whale Shark Day! This celebration was created to raise awareness about the importance of whale sharks to marine ecosystems. Whale sharks face falling population numbers. At AlgaeBarn, we are taking this occasion to talk about how we can all do our part to help protect these magnificent animals.

Every year on August 30th, the world shines the spotlight on these wonderful animals. Whale sharks live in warm waters all over the world. They are filter feeders, so their 3,000 or so tiny teeth aren’t nearly as scary as it sounds! Whale sharks spend their days inhaling plankton, fish eggs, small fish, and tiny squid. To eat, whale sharks filter thousands of gallons of water through their gills. 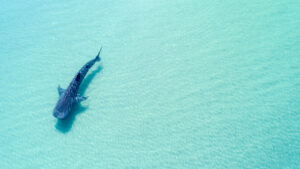 Whale sharks only reach maturity at around 25 years of age. Their primary emphasis in the early years of their lifespan is food. Whale sharks require that volume of food to fuel an epic growth spurt. From roughly 25 inches at birth, they grow about a foot in length every year. These giants finally max out at over 40 feet long and 41,000 pounds at maturity.

Whale sharks are classified as endangered. Which means in no uncertain terms that they face extinction. International Whale Shark Day was created to highlight the wonder of whale sharks. They play a crucial role in keeping our ocean ecosystems healthy and balanced. 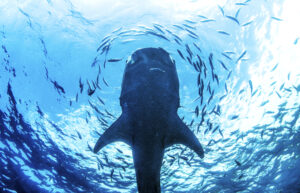 Whale shark populations have fallen by roughly 60% in the previous 75 years. As of today, there are no concrete figures on their population. It is estimated that between 100,000-200,000 whale sharks are living in our oceans as we speak. Surely, the lack of data goes to show that more research is needed to study these giants.

Why are these gentle giants endangered?

Currently, there are many threats to whale sharks. Overfishing, habitat destruction, climate change, and poorly managed tourism and boat traffic all endanger these giants. Whale sharks are among the world’s largest animals. In fact, they hold the record as the largest vertebrate fish! Whale sharks are found all over the world mostly in tropical and subtropical seas. These giants prefer warm waters and inhabit various depths of the ocean.

One reason they are so vulnerable is due to their breeding habits. Whale sharks reach sexual maturity at around 30 years of age. There is very little known about whale shark reproduction. In fact, much of what we know comes from a single female whale shark in Taiwan. This “Mega-Mom” was set to give birth to 304 pups! This was confirmed to be the largest brood of any shark species.

Whale sharks are ovoviviparous, which means that their embryos develop within their bodies. The whale shark embryo develops within an egg. The embryo takes nutrition from the yolk, but it emerges from the egg while still inside the mother. When an egg hatches, it is fed by secretions from glands within the mother until it is mature enough for birth.

Commercial fishing also has an impact on the population of whale sharks. Sadly, whale sharks are often injured or killed as a product of bycatch. There has been an increase in commercial fishing for many species of fish including sharks. In the case of non-target fishing, many fishermen cast massive nets, resulting in the capture of whale sharks. Large nets that drag through the water also damage coral reefs. The nets can become stuck on reefs and hauled out along with any fish captured.

Sadly, fishermen have targeted whale sharks because there is a demand for shark meat and fins. Despite efforts to educate about these endangered giants, fishing rates have climbed. What’s more alarming is the demand for fishing is increasing at a faster pace than which whale sharks reproduce. This results in an even more significant drop in the population of whale sharks. In other words, whale sharks are literally dying quicker than they can reproduce.

Another factor contributing to whale sharks declining numbers is habitat destruction. We are all aware of the sobering amounts of industrial wastes that have been discharged into our world’s oceans. The health of their ecosystems has also been wounded by to tragic oil spills. Increased commercial boat traffic just adds to the pollution rates.

Given whale sharks’ voracious appetites, the loss of biodiversity shrinks the pool of prey available. This directly threatens their survival. In addition to this, oil spills and water pollution only accelerated ocean acidification. Ocean acidification is the shift in water pH level due to excessive carbon dioxide in the atmosphere. This affects every aspect of life on coral reefs.

Whale sharks have been observed feeding on fish spawn and even baitfish. While they can ram feed like basking sharks, they can also suction feed. This means they remain stationary in a patch of prey and use their mouth to pump plankton-rich water over their gills. Whale sharks are capable of filtering over 150,000 gallons of water per hour.

Another surprising factor affecting whale shark populations is the growing demand for diving tourism. Because these sharks are harmless, it’s become popular for tourists and divers to swim with them. This may appear to be innocent, but it can affect their feeding habits. Whale sharks spend hours skimming plankton at the water’s surface. It leaves them more at risk to vessel collisions.

What steps are being taken to help whale sharks? 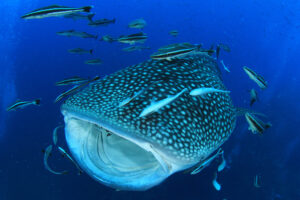 What we can do to help

Simply by reading, sharing, and commenting on this article, you are helping to build awareness on these conditions. We encourage all our readers to keep exploring the resources available here on our blog. Eating farmed or responsibly harvested seafood is one way to help whale sharks. We can also take measures to reduce our home consumption of single-use plastics.

Whale sharks play an important role in maintaining the health and balance of our ocean ecosystems. Whale sharks are among the world’s largest animals. They are threatened by overfishing, habitat destruction, climate change, and boat traffic.

Sharing these lessons and ideas with our family and friends is vital to helping these giants. It is also crucial to support organizations that aim to make our oceans cleaner and healthier. International Whale Shark Day was established for exactly this reason! This is how we can all work together to promote education and conservation.

August 30th is International Whale Shark Day! This celebration was created to raise awareness about the importance of whale sharks to marine ecosystems.

Today is Nonprofit Day and we are celebrating one of our favorite nonprofits, ARC Reef! As part of our mission to improve sustainability in the reef