You are here: Home / Other / Using the Aquarium Cycle Kit

One of the more fundamental tasks one must undertake when maintaining a saltwater aquarium is controlling nitrogenous waste. Most critical is the elimination of ammonia and nitrite, which are both highly toxic and can “crash” a tank in very short time. Fortunately, this job is naturally (and quite effectively) handled by various microbes. These, the nitrifying bacteria/archaea, form a fairly diverse group. Nitrifiers generate metabolic energy by oxidizing ammonia and nitrite into nitrite and nitrate, respectively. While not desirable in very high concentrations, nitrate is considerably less toxic than its precursors.

Nitrifiers are ubiquitous in the natural environment, including saltwater, freshwater and soils. Generally, all it takes is a small quantity of water, rock or substrate from an “established” system to colonize a newly set up, sterile tank. Once a large population of nitrifiers has established itself–to the extent that ammonia and nitrite are metabolized so quickly that they never reach detectable concentrations–the system is said to be “cycled.”

As a matter of routine, aquaria are cycled before any animals, including fish, are added. This process can take as long as weeks and can thoroughly test the patience of many hobbyists. In order to speed up the nitrogen cycle, one may resort to the use of bottled inocula. Such products might contain different microbial species but typically include Nitrosomonas (an ammonia oxidizer) and Nitrobacter (a nitrite oxidizer). 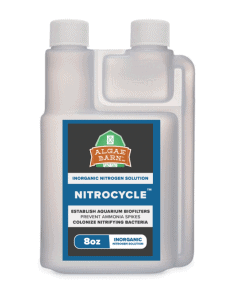 Before aquarists enjoyed the convenience and consistency of bottled products, they had to use water, rock or substrate from other tanks. While this approach certainly works, it also poses the risk of introducing undesirable organisms such as pathogenic bacteria, parasites and nuisance algae.

To add a source of ammonia–a fuel to get the inoculum going–many keepers added a so-called starter fish. This was usually a cheap, hardy fish such as a damselfish. Sometimes the fish survives the ordeal, sometimes not, but either way, it suffers. Thus, most of us would agree that this practice raises distinct ethical concerns!

Some hobbyists have avoided this by alternatively using dead organic material such as a couple pieces of prawn. While this worked pretty well, it often left a stinky, dirty mess behind. Worse, it promoted the growth of organoheterotrophs that compete with the nitrifiers.

To address these problems, hobbyists developed what are now known as fishless cycling methods. These methods usually involve adding (rather than yucky rotten fish food) a carefully measured dose of inorganic nitrogenous material (generally ammonia-based) as a starting fuel.

One can obtain relatively fast and predictable results when using bottled inoculants and specially prepared inorganic cycling fuels–as with the Aquarium Cycle Kit! This complete package includes TurboStart 900 by Fritz and NitroCycle by AlgaeBarn. TurboStart 900 contains multiple species of ammonia- and nitrite-oxidizing bacteria. NitroCycle is a specially formulated, inorganic nitrifying fuel. The kit is designed such that you can easily measure components as to get fast results with no problems.

It’s quite easy to find the right dosage for your system:

Now, it’s impossible to say exactly how fast, since every tank is different with regards to temperature, water chemistry, flow dynamics, biomedia, etc. But in some cases, systems cycle out completely in five days. If you really want to speed things up, raise the water temperature to around 83 or 84 degrees F (just remember to lower the temperature when the cycling period is over!).

During the process, you’ll observe lots of ammonia, then lots of nitrite. But as the bacteria multiply and use up the NitroCycle, you’ll notice increasing nitrate levels. And how does one know when the system is fully cycled? That’s easy: When ammonia and nitrite are no longer detected in the water! For this, you should regularly test for ammonia, nitrite and nitrate. 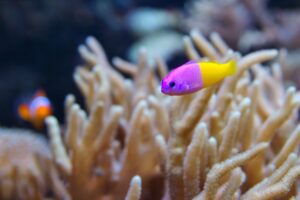 At this point, it is likely safe to begin stocking. It is best to stock a system incrementally, testing along the way. This often means acquiring no more than one or maybe two animals at a time. By taking things slowly and gradually, you can avoid ammonia spikes that may occur when the bioload exceeds the capacity of the bacteria to rapidly metabolize it to nitrate. To be on the safe side, continue to test ammonia, nitrite and nitrate often.

Before you bring home your first animal(s), perform a large water change. This will refresh the system water of lost trace elements and depleted alkalinity as well as dilute the nitrate that surely has accumulated. Ideally, nitrate should always be kept below 10 ppm; less than 1-2 ppm is even better.

From time to time, situations may arise (medications, power outages, equipment failure, disruptions to biofilter, etc.) that can reduce populations of nitrifying bacteria. These events can result in spikes of ammonia and/or nitrite. Aside from emergency water changes, it is totally acceptable (and indeed advisable) to add some more TurboStart. Assuming the cause of the root problem has been remedied, this will accelerate the rebounding of the biofilter. What you should not do in these situations is add NitroCycle. In fact, you should never use NitroCycle or any other product containing ammonia/nitrite in a tank while it contains live animals!

The nitrogen cycle is certainly one process you can’t skip. While it might be downright torturous to sit through (can’t wait to start getting fish and corals, right?), it doesn’t have to be complicated or take forever. And, if you go with a clean, inorganic fuel source, it doesn’t have to end with a disgusting mess. All great reasons to trust the Aquarium Cycle Kit! And what to do for even more thorough system conditioning and more long-term nitrogen stability? For a functionally complete microbiome, including aerobic/anaerobic biomedia (MarinePure) and denitrifying bacteria (PNS Substrate Sauce), simply upgrade to the Ultimate Aquarium Cycle Kit.