You are here: Home / Other / Should I Use a UV Sterilizer?

The two most hated things for a saltwater aquarium keeper are fish diseases and “bad” algae. Some hobbyists make an attempt to go all out against these threats by using an ultraviolet sterilizer. At least in some cases, a properly sized and properly installed sterilizer unit can indeed help to reduce the incidence of disease or algal blooms. However, they are never foolproof. And, even more notably, their use does not come without a price.

Here we examine the limited benefits UV sterilization as well as some of the drawbacks. We shall begin by describing how UV sterilizers work.

Ultraviolet Sterilizers – Shot in the dark

Germicidal ultraviolet radiation kills microorganisms in two different ways. In the first, it disrupts the organism’s genetic material (DNA), thereby outfight killing it or rendering it incapable of reproducing. In the second, when applied to aqueous environments (e.g. aquariums), it generates toxic oxidants that degrade the organism’s vital organelles (cell membrane, chromosomes, etc.). 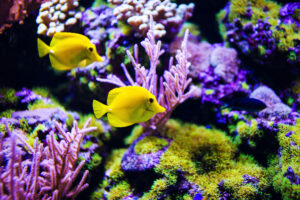 When it comes to a particular UV sterilizer unit’s killing efficiency, exposure is everything. Much more intense and prolonged exposure is required to kill larger organisms. Thus, UV is by far most lethal towards microorganisms (i.e. bacteria and archaea) and extremely tiny algae such as Nannochloropsis. Lethality for a comparatively large and well protected diatom such as Thalassiosira is considerably lower. Only the most intense UV light and longest exposure times are capable of killing the “huge” cells of parasitic protozoans such as Cryptocaryon.

One additional factor in the overall effectiveness of a UV sterilizer is the spectral output of its bulb. Some wavelengths within the ultraviolet range are more lethal than others. The UV range is divided into UV-A, UV-B and UV-C. UV-A (320-400 nm) is least effective; however, when emitted from some aquarium lights, it can cause burning of corals by harming zooxanthellae. UV-B (280-320 nm) is perhaps a bit more destructive to living tissues, but still isn’t all that lethal to most organisms. UV-C (200-280 nm) is certainly the most deadly to small lifeforms and is the wavelength most frequently encountered in UV sterilizers. Specifically, most sterilizer bulbs emit wavelengths of around 254 nm.

Where you plumb your unit matters. Some aquarists like to conceal the unit within the cabinetry, running it so that it draws water from, and empties back into, the sump. However, this reduces the unit’s efficiency (especially in systems with smaller sumps or low system turnover rates) because it essentially keeps redrawing the same water over and over again. Only slightly better is plumbing the unit inline to your main filter system, just before water is returned to the display tank. The ideal is to draw water into the sterilizer from the sump and return it directly into the display. This not only prevents re-recirculating the same water, but it also makes cleaning, bulb changing and fine-tuning the flow rate a lot easier.

The killing efficiency of a given UV sterilizer unit at a given time depends upon several factors. These include:

Quite often, for UV sterilization to be very effective (especially against fish parasites), the aquarist must obtain a substantially “oversized” unit. If you really want your next unit to kill stuff, be sure to read the ratings on each box very carefully as you shop. Remember that ratings for saltwater applications are significantly lower than those for freshwater applications.

Many manufacturers provide two sets of ratings: One for “clarification” and another for “sterilization.” Clarification means that at a given flow rate, the unit is capable of killing water-coloring microbes and microalgae only; true sterilization implies that even with all things considered (average water turbidity, average distance of target organism from the bulb, etc.), the unit can kill most common protozoa. 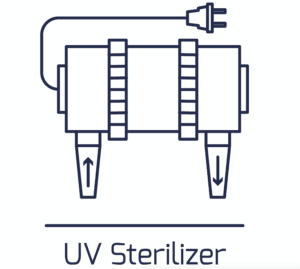 There are some disadvantages to using Ultraviolet sterilization over other types of sterilization. For example, whereas ozone sterilization is effective throughout a larger treatment zone (reactor, skimmer, sump, etc.), UV sterilization can only kill those organisms that pass right through the unit. Thus, nuisance benthic (filamentous or film) algae can spread without interruption. Similarly, some parasites can drop their eggs onto the aquarium substrate where they may develop without harm.

Frankly, there are also some clear disadvantages to using any kind of sterilization. The biggest downside is loss of beneficial plankton. Think about it… Killing our phytoplankton and bacterioplankton have two undesirable results. The first reason is that without these primary producers, your nitrate and phosphate levels can go out of whack (usually toward excess). Yes, whether you carbon dose or not, these organisms sequester significant quantities of nutrients! The other reason is that these tiny plankton are a natural and hugely important source of nutrition for many filter-feeders including corals. And most reef aquaria already suffer from a lack of plankton to begin with!

None of this is to say that UV sterilizers are inherently bad. For example, they very effectively help to prevent the spread of disease when used in quarantine systems. You should, however, be aware that sterilization unavoidably presents some sacrifices. Thus, in our opinion, if you have issues with bad algae or with disease, improving your husbandry/maintenance practices should always be the first resort!