The pinnatus, or pinnate, batfish (Platax pinnatus) is instantly recognizable (at least as a juvenile), not just for its attractive appearance but also for its graceful form and movement. The species is coveted for its distinctive coloration as a juvenile; however, it is nevertheless widely avoided due to a couple of decidedly undesirable traits. These include its change upon adulthood into a more characteristic spadefish form: A much more muted coloration, a more robust body shape and a maximum size that is unmanageable for the majority of home aquarists. Additionally, it is known as unusually challenging to maintain in captivity, being exceedingly delicate/sensitive as well as difficult to feed. Oh, and it isn’t even reef-safe!

So who would want to keep this species, and why?

Batfish for the BIG FOWLR

Overall, straight-up fish enthusiasts have a slightly different set of interests, and temperament, than the average reef aquarium hobbyist. Whereas reefers love complicated diversity, details, precision, nitpicking… the “fish-only” folks are actually most keen on keeping their animals as pets. For fun! Above all, they prefer larger, longer-lived species that are inclined to interact with their keeper (especially at feeding time!). Undoubtedly, the pinnatus bat is a poster fish for this sort of hobbyist. 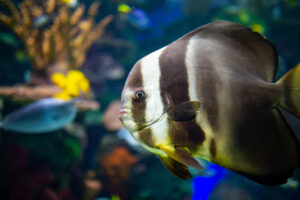 Pinnatus bats belong in a large, well-maintained, fish-only-with-live-rock (FOWLR) type of aquarium system. Aside from sturdier or well-defended animals such as starfish and sea urchins, this fish is likely to attack and eat invertebrates. Even corals have been listed as potential targets. On the other hand, especially as a juvenile, this species can itself make a vulnerable target for bullyish predators such as triggerfish. As such, if juvies are to be kept, they are best acquired first and given the advantage (against late-comers) of claiming the home field. Also, any tankmates acquired along the way should be equal or lesser in size.

Most people who wish to keep this species will want to acquire a younger, smaller specimen due to its juvenile coloration; black with red edging along its splendid winglike finnage, these fish are really, really striking indeed. Still, it is the juvies that give the species its bad name–with respect to hardiness, anyway. Though rarely imported as wild-caught adults, mature specimens do not appear to be as wimpy nor such finicky eaters as the youngsters. But so many aquarists in the past have looked past that–and failed–under the spell of this fish’s amazing juvenile form and colors. That, and the appeal of raising a specimen from a “baby” to a large adult.

In recent times, the availability of commercially produced juvenile pinnatus batfish has given us the ability to have it both ways: Enjoy the beauty of this species and the ease of care that comes with a captive-bred specimen. For “pet” fish lovers, these cultured specimens are particularly desirable in that they have no special requirements, are far less picky about foods and are a little more forgiving of less-than-perfect water parameters. Best of all, they can be raised from a “cute” little individual and grown out to a legit ”monster” fish.

That brings us to tank size. Pinnatus batfish get pretty big for an aquarium species. Think something like a foot long and a foot and a half tall. Plus, they are active swimmers! For these reasons, the species requires an absolute minimum of 200 gallons tank space, though much more is highly preferable. If you like to use lots of rock, for example, you’ll probably need something more like 350 or 400 gallons. Seriously. 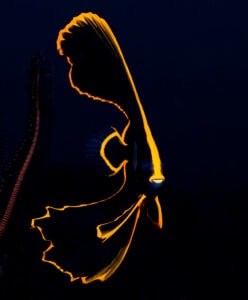 Ideal tankmates for an adult batfish are large but relatively peaceful. This might include lionfish, moray eels and even smaller, bottom-dwelling sharks/rays. Notorious fin nippers such as triggers and puffers should be watched closely.

Those who can provide the appropriate amount of tank space will find that healthy, fully grown pinnatus bats are not nearly as hideous as some claim. In fact, many would find them quite handsome. The adult fins are well rounded–even the pectoral fins. Its body is highly compressed. The colors are subtle but nevertheless pretty nice, bearing two fat, vertical bars (one over the eye) on top of a silvery background. A third “bar” in the midbody is fatter and somewhat shadowy. The background color is lighter in the face and darkens towards the tail. A golden yellow glow over the fins is not uncommon. These yellow markings can be especially pretty because the fins are edged with a thin but distinct black margin.

As this fish grows, it reportedly becomes very “tame” and accustomed with its keeper to the point that it accepts hand feedings. Unlike the juvies, which prefer items like whole (especially live) brine shrimp and black worms, adults will wolf down just about anything. Meaty items like krill, prawns and chopped squid are greedily accepted. Well-conditioned adults might take things like big pellets just the same. However, it appears that one key to these omnivores’ health in captivity is to regularly provide a “vegetable” item such as nori. Better yet is live macroalgae. Those who are fortunate enough (or smart enough?) to install a planted refugium in their system will have constant access to fresh live seaweeds such as sea lettuce and ogo for this purpose.

Do not buy this fish on whim, for your reef system, simply because you like its showy color pattern. But if you are just starting a very large FOWLR system for mellow fish species, by all means, try one out! Especially if you can start small and grow it out. Especially if you acquire it as captive-bred. It could very easily end up being one of the coolest and most fun fish you’ve ever had!