You are here: Home / Other / Do I Need a Protein Skimmer?

There are a lot of tough calls in reef aquarium keeping. While the focus of attention should be on creating the healthiest and most natural environment possible for your animals, some thought will (understandably) go into the tank budget. For this reason, hobbyists often question whether or not a particular piece of expensive equipment is absolutely required. Protein skimmers are (even when of questionable quality) fairly pricey; this makes them a prime target for hyper-frugal aquarists when cost-cutting for a new aquarium system.

So, does the average aquarist really need one? Look at it this way: The one thing that you (your animals, actually) need is good water quality. A well-made and properly adjusted protein skimmer will certainly help you get there. And it will be quite cost effective to operate, at least in the long term.

Skimmers aren’t the only way to filter water. But when you compare skimming to the other methods, skimmers come out looking pretty good. Think about it… They reduce the need for water changes, saving you dough on salt and RO water. Plus, you never need to replace any costly chemical filter media (as with granulated activated carbon, resins, etc.). And then there are the additional benefits, such as extra aeration which increases dissolved oxygen levels and stabilizes pH. Finally, they are incredibly easy to install and service. But are there downsides?

We will here address how and why protein skimming became standard procure in reef aquarium husbandry, what to look for in a unit and how to get the most out of yours–if you get one. 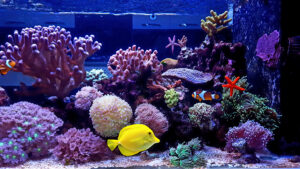 It’s hard to pinpoint where the very first skimmers were used. Fish farms? Water treatment plants? What we do know is that marine aquarists (especially in Germany) caught on to this technique before there was anything even resembling the modern reefkeeping hobby. Tunze, for example, produced the first aquarium protein skimmer in 1963! Early reef aquarium gurus (e.g. Peter Wilkens) had begun to popularize the use of skimmers by the 1970s.

Though they were prototypes and many different takes on these original designs have been made over the years, the basic aquarium protein skimmer has changed little over the decades. Most recent models incorporate subtle design innovations that improve efficiency by reducing bubble size, lengthening bubble residence time in the column, etc. That’s not to say that modern units aren’t much, much better; while these design changes may seem minor, the improvements in performance they have yielded are substantial.

Indeed, some of the skimmers on the market today perform so well that it may seem crazy to forego one. But hey, if you absolutely love doing huge weekly water changes….

If you get very deep into how protein skimming actually works, you’re entering the realm of advanced physics and engineering. Seriously. But anyone who’s seen the froth that builds up along a beach can get the gist of it.

Skimmers utilize a process referred to as foam fractionation (or adsorptive foam separation). Basically, proteins and other organic compounds are chemically attracted to the surfaces of the tiny air bubbles. Fractionation works best in high-pH environments such as seawater as they promote the electrical interactions between the water, the bubbles and the organic substances. Saltier water is also better because it is denser, producing tinier and more stable bubbles.

Air is generally drawn into the unit via a so-called venturi system. An open air line allows air to get sucked into the pump where it is (at least ideally) chopped into miniscule bubbles. Intake is controlled with a simple valve.

In theory, a film of organic wastes envelopes the bubbles due to surfactant action. Most organic compounds have both a hydrophilic (i.e. water-loving) and a hydrophobic (water-hating) side. This causes the molecule to orient itself such that the hydrophobic end attaches to the gas bubble and the hydrophilic end extends into the water. This orientation is maintained even as the bubble rises out of the water column, creating a fairly stable foam (i.e. foamate). As the foam rises, it is directed into a vessel when it breaks down and condenses back into a liquid. When the unit is functioning optimally, this liquid (i.e. skimmate) is highly concentrated, appearing dark and emitting a pungent odor.

As with most everything, there are a couple minor downsides to protein skimming. While they are impressively selective in what they remove overall, the foam they produce can entrap and lift out beneficial microorganisms such as bacterioplankton and phytoplankton. It is also said that they can remove certain trace elements. However, if planktonic microbes/algae are dosed often, and trace elements regularly replenished, this shouldn’t ever become a big issue. 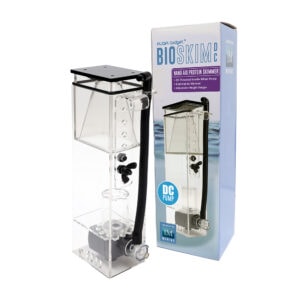 Given the minor drawbacks and huge benefits (including ease of use), it’s understandable why protein skimming is so widely used by aquarists. There is hardly a simpler way to remove wastes (especially dissolved wastes). And they remove these raw organic wastes before they can break down into more problematic substances (ammonia, phosphate, etc.)!

The cost of a well-designed skimmer seems to be the only cause for pause among some hobbyists. But even the stingiest aquarists cannot deny the economical operation of these devises over time. If your tank is more than a few gallons in size, and you plan on running it for more than a few months, there is nothing that will save you more money (and precious time) than a quality protein skimmer.

That being said, skimmers are not always necessary if there is an appropriate balance of phyto, macroalgae and microbes in your system. And every system is unique, including yours. Because skimmers are not always compatible with naturalistic methods (they remove many beneficial microorganisms, after all), you should always carefully weigh out the costs and advantages before installing one!