You are here: Home / Other / An Overview of the Firefishes

Marine aquarists are blessed with a gigantic selection of beautiful fish species to keep. Among these, only some are peaceful, reef-safe and relatively easy for beginners to keep. Even fewer are small enough at full size to be suited for nano aquaria. The firefishes are exceptional in that they hit all of these marks.

Still, like any group of aquarium animals, they have their own special husbandry requirements. Here, we discuss the care of this gorgeous genus and also take a look at its interesting natural history. 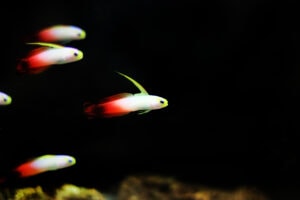 The firefishes (Nemateleotris spp.) comprise a fairly small genus of dartfishes that are distributed across the Indian and tropical Pacific oceans from Hawaii to East Africa and Australia to southern Japan.

Firefish occur in deeper waters (very often over 100 feet depth). They inhabit the upper areas of steep outer reef slopes. They prefer sandy, rubbly sea floors where they burrow in tiny caves. They are frequently encountered as monogamous pairs.

The firefish diet consists almost exclusively of microcruceans. While this could be anything from amphipods to shrimp larvae, the majority is planktonic copepods. Firefish habitually face the incoming currents and snatch plankton as they drift by.

The common firefish (Nemateleotris magnifica Fowler, 1938) is the easiest of the group to obtain for aquaria. It is distributed from the eastern coast of Africa to the Hawaiian Islands and from the Austral Islands north to the Ryukyu Islands. It is reef-associated, found at depths of from 6-70 meters (20 to 230 feet), usually 6-28 meters. It has a yellow head and silvery grey-white body, gradually darkens anteriorly. The tail has red-orange markings. The first rays of its dorsal fin is greatly extended and flicks back and forth (apparently as a signal to conspecifics). While its colors (while absolutely splendid) are somewhat muted compared to its gaudy brethren, it boasts the longest fin extension. It grows to 9 centimeters in length.

The exquisite firefish (Nemateleotris exquisita J. E. Randall & Connell, 2013)  appears to be restricted to the Indian Ocean from Mauritius, South Africa and southern Mozambique to the Red Sea and the Andaman Islands. Though this species was once thought to be a regional variant of N. decora, it is substantially larger with a more slender body, longer snout, and a shorter dorsal fin. It’s also a bit different in color with more yellow in the anterior part of the body that extends further towards the tail than on N. decora. In inhabits similar habitats as N. decora, though in even deeper waters. 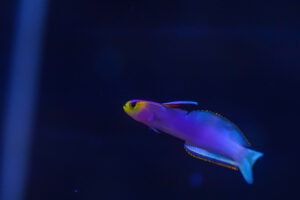 These gorgeous little fish make a very fine addition to aquaria housing mellow species. They’re fantastic in reef systems (with the exception of bare-bottom set-ups). Since they don’t get particularly large, they may be kept in tanks as small as 29 gallons. A tight-fitting hood, however, must be in place as these fish are notorious jumpers.

Like manny small deepwater species, they can be rather skittish. They don’t necessarily hide a lot, but they retreat to their shelter at the first hint of danger. In order to help make a firefish feel safe and comfortable, the keeper should provide ample rubble over a deeper sand bed. Little caves and burrows are greatly appreciated.

Since firefish are so often found in the wild in pairs, it may seem a good idea to add two. However, this can only be done with extreme caution, as they are prone to intense fighting if they don’t get along. Don’t add a pair unless you can easily capture and rehome one of the two. Some aquarists have had success keeping N. magnifica in larger groups, but this is only advised for groups of at least a half dozen in a larger tank (at least 120 gallons).

Firefish can typically be trained to accept frozen foods (brine shrimp, small mysis, cyclops, etc.). However, they will fare much better where they additionally can feed on live foods throughout the day. For this, larger planktonic copepods such as Apocyclops and Oithona are excellent. Supplemental feedings of live brine shrimp and daphnia and further improve their health–and also provide opportunity to witness their natural planktivorous hunting behavior in full mode!