You are here: Home / Other / 5 Tips for Increasing Aquarium Fish Compatibility

You purchased only the very best aquarium filtration equipment. You tested the water every other day. You feed top-shelf foods. You did everything right… only to experience livestock loss because your fishes have killed each other! Fish compatibility can be pretty frustrating, right? Just understand that this isn’t happening because your fish are “mean.” In the wild, they’ve evolved to aggressively protect themselves and their territory, since reefs are naturally crowded environments with very limited resources. Thankfully, there are a few steps one can take to minimize these losses as much as possible in your fish tank. Here are a few.

It is highly advisable when building the aquascape to focus on home-building. Nothing makes a reef fish feel more secure than having its own shelter. Sure, it may get booted from a preferred spot by a dominant tankmate, but so long as it can easily find another, it will be just fine. In order to accomplish this, avoid packing live rock together when constructing the hard scape (especially the reef base). It helps with overall fish compatibility to place small rocks first (like feet) and then put progressively larger rocks on top of them. This leaves a vast network of caves and crevasses that create ample space for fish and other reef animals to hide in. 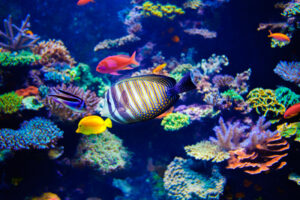 A sure way to create compatibility issues with your aquarium fish is to haphazardly add specimens according to your whims. Sure, reef aquaria aren’t always easy to plan, especially into the far future; there are just too many variables and uncertainties. But a commonsense approach to fish stocking can go a long way to prevent some squabbles between tankmates. So you need a strategy. We all keep lists of “dream fish,” right? Well, turn that list into a plan. Here’s the plan: Rearrange everything on your list so that you begin stocking with the least aggressive species and end with the most aggressive. When unsure about two species with similar levels of aggression, place the smaller one ahead of the larger one on the list. The idea is that the weaker/more timid species will have time to establish themselves in the tank and be able to assert themselves as the progressively tougher, more bullish species are introduced.

One of the most common mistakes of beginning and veteran aquarists alike is overstocking. Not only does overstocking fish compromise water quality (leading to algal blooms, poor coral health, etc.), but it also increases the likelihood of aggression between competing specimens. Particularly if you’ve followed the previous two steps, you’ll know exactly when the fish “community” is about to collapse into violent chaos–and be able to prevent it by halting further additions. Forget those nonsensical inch-per-gallon rules and listen to your fish; if some of your specimens are getting bullied now, what do you suppose will happen if you add an ever more aggressive species to the mix?

While much of the fish behavior we observe is truly instinctual, it can be a bit surprising how much fish learn. For sure, much of their social behavior is shaped by their environment, both past and present. This is why there is such a marked difference in levels of aggression between wild and captive-bred individuals of the same species. Whereas on the reef (where only the strong survive) a blenny might display considerable aggression (particularly against its own kind), the same blenny might be quite docile in a fish hatchery where food is dispensed liberally. Plus, cultured fish are often heavily crowded in specialized high-density grow-out systems from the time they hatch until they are sold. The result is a very mellow, tolerant, highly “socialized” specimen. 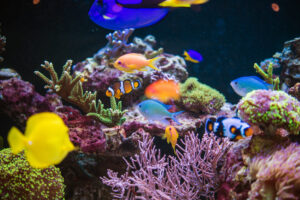 This brings us to the issue of conspecific (i.e. same-species)  fish compatibility. You’d think that animals of the same species would look out for each other. Wouldn’t that benefit the species as a whole? Not really. Problem is, because they require the exact same type of hiding spaces, foods, etc., conspecifics engage in the most intense sort of competition. Add the extra aggression exhibited between males for mates and you’ve got some serious animosity. A common mistake aquarists make is to buy animals in pairs believing that “just one would get lonely.” Nothing could be further from the truth. Particularly within the limited confines of an aquarium, territorial disputes can result in mortalities. For this reason, stick to only one individual specimen per species. In the case of sexual pairs or harems (clownfish, anthias, etc.), acquire only established pairs/groups. When stocking “schooling” species such as firefish, add as many individuals as possible; in this way, inevitable quarrels between schoolmates will be diluted throughout the larger group.

Fish will be fish. Sometimes the cutest list goby or damsel can turn out to be a huge nightmare for the other aquarium inhabitants. You can never really be 100% sure about how the complicated interactions of a fish community will play out in reef tank!

That being said, your stocking habits will ultimately have a significant influence on the levels, and outcomes, of these aggressions. Maybe your tank will never quite be a place of harmonious tranquility. But by following the above suggestions, there’s a pretty good chance that you’ll lose fewer (if any) specimens to fighting. And your fish will be much happier for it!