Sure, clownfish and damsels are cool… But you may be looking to add something that isn’t seen much in the hobby. One thing to keep in mind is that most oddball fish have more husbandry requirements and can be very finicky in home aquariums. That’s why it is crucial to conduct all due research before purchasing any of these fish and be ready to work a little harder to keep them happy.

This list is for the people out there that like things that are bit different and unique! 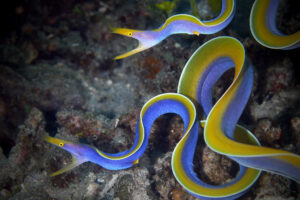 The fish that ranks number one on my list of oddballs is the beautiful blue ribbon eel. These guys have a striking color and will definitely stand out in any aquarium.  Their neon blue and yellow body can reach up to 2 feet in length. Not only do they become rather large, but they also need plenty of space to swim and hide. Thus, they require a tank of at least 100 gallons.

Ribbon eels are ranked at an expert level due to their exacting care requirements. It is important to ensure that your parameters are perfect before adding a ribbon eel to your tank. For example, they have no tolerance to any ammonia, nitrite or nitrate.

Along with their sensitivity to water parameters, they also can be very difficult to feed. It is possible to train them on frozen food; however, most of the time they will only take live food (especially when first added to the aquarium). Some aquarists offer them minnows or guppies. No matter what you feed it is important to make sure the live food you are using is healthy; if you are feeding unhealthy fish to your eel, it can in return make your eel sick or won’t be offering it many nutrients that it needs in its diet.

This next fish would make a great addition to a nano tank. The red rooster pygmy waspfish offers bright red coloration and is very entertaining to watch move around the aquarium. They can thrive in a smaller tank due to them spending most of their time hiding out in their territory in the tank. It is very common to find them in the same spot every day and it shouldn’t raise any concern. Due to their lack of movement, they have slow metabolisms.

They can be trained on frozen food and potentially pellets; however, newly imported specimens may only accept live food. This fish may be small and cute but don’t let its cute looks fool you: If a fish can fit in its mouth, it will eat it. Make sure that any fish you add in an aquarium with a waspfish is much bigger so it doesn’t become a snack.

Like its close relatives, this species has venomous spines on its dorsal fin. They use their spines as a defense mechanism. Obviously, it is therefore important to be aware of where your waspfish is when working in the aquarium to avoid being stung. This sting is not deadly to humans but it can be deadly to other animals in the tank.

The red rooster pygmy waspfish only reaches around 4 inches in length. It requires a minimum tank size of 10 gallons. 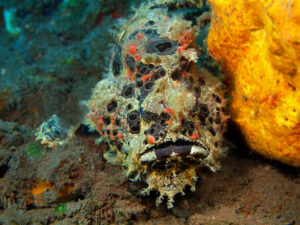 The wartskin angler is another predatory fish that comes in a variety of stunning color patterns. These strange fish spend most of their time disguising themselves in the rock waiting for the perfect moment to strike at prey. Most of the time, they only accept live food. They rarely chase after a fish as they are ambush predators. So as long as you have live food available for them in the aquarium, they will eat when the perfect moment comes.

Again, it is crucial to ensure that the fish or shrimp that you are feeding your angler has been raised on healthy foods as those food and nutrients will indirectly be fed to the angler when it eats the fish. You never want to feed your fish unhealthy live food as it can cause potential health issues. You may have the best of luck raising your own live food such as guppies or mollies so you can feed them nutrient packed food for your angler. There has been success in training anglers on frozen food, though this may take some time. Usually people will begin the process by tying a piece of krill or silver sides to fishing string and dangling it in front of the anglers face waiting for it to eat. Sometimes, once they have gotten a taste of the frozen food, they will be more inclined to eat it again and eventually won’t require the fishing string method. This process can sometimes take months and it is not a walk in the park.

Keep in mind that they can open their mouths very wide; even if the fish doesn’t look like it could fit in their mouths, they just might! Anglers are very opportunistic and I have personally seen a 3-inch angler eat a 6-inch fish. Thus, most people decide to keep a species only tank when they have them. If you don’t like the idea of just having the one fish in your tank, you can consider purchasing a school of damsels or chromis to add some movement to the tank. Just keep in mind that they will eventually end up being eaten and can become quite expensive when you’re having to replace them consistently!

Since anglers won’t swim around in the tank, they do not require that large of a system in order to thrive. The wartskin angler only reaches around 4 inches in length. It requires a tank of at least 20 gallons in size.