These days, soft corals don’t get quite the attention they once did. One reason for this simply is the abundance of wildly colorful stony corals that have fairly recently become available. Another reason is the concern that soft corals can release allelopathic substances into the water that may harm other (especially stony) corals. Even so, soft corals in general, and toadstool leather corals in particular, offer a lot to reef aquarists. 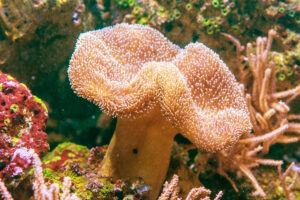 Most would agree that toadstool leather corals (Genus Sarcophyton) are pretty aptly named. Basically, they look a whole lot like a giant leathery mushroom. Long, slender polyps emerge from the upper surface of the “cap” and wave in the currents. They’re not particularly renowned for their color–generally a base color of beige to greyish brown, sometimes yellow, with greenish or golden brownish polyps. For sure, it is their interesting shape and potentially large size that attracts so many reef hobbyists.

Of course, every aquarium animal has its drawback or special challenge. While so many softies are wrongfully blamed for releasing those nasty chemicals into the water, toadstools really are guilty of this. Indeed, Sarcophyton shares with Sinularia the distinction of being the most copious producers of these toxins. Thus, in order to enjoy them in the home aquarium (especially the “mixed” reef aquarium), certain precautions should be taken.

This article provides an overview on toadstool coral care and also offers a few tips on minimizing the effects of these corals’ ellelopathy.

Leather corals in the aquarium

There are a few closely related genera of leather corals that are distributed in the aquarium trade. In addition to the toadstools, these include Sinularia (the finger leather corals) and Lobophytum (devil’s hand leather corals). Toadstools are most closely related to (and most closely resemble) devil’s hands in that both exhibit dimorphic polyps (i.e. two sets of polyps). These leathers have large, conspicuous pinnate polyps that extend from the capitulum (i.e. the cap-like structure) as well as much smaller/shorter polyps that don’t extend far from the base. The long polyps of Sarcophyton are especially elongated, a trait that endears them to a great many keepers.

All leather corals, including Sarcophyton, are considered to be easily kept in a properly maintained reef aquarium. They like rather bright lighting, but tolerate a range of medium to intense intensities. They like brisk, chaotic water movement, but tolerate a range of moderate to strong currents. Avoid powerful, direct jets of water flow. When introducing these corals to a very brightly lit environment, photoacclimate them to avoid shock. The polyps tend to open and close regularly; however, when lighting and flow are ideal, polyps are open most often.

Sometimes toadstools not only close up for relatively long periods of time, but become enveloped in a tight, waxy film. No worries–this is perfectly natural. It is widely held that this serves to remove any sediment or algae that may be on the colony. Most often, the film breaks away a few days later with the polyps reemerging shortly thereafter. Do siphon off the pieces of sloughed film, as they can irritate any corals they land on. If a new specimen develops a film and then refuses to open, try moving the colony to a new location (especially with slightly strong flow). You may have to relocate it a couple of times until finding its Goldilocks zone.

Toadstool leathers are good corals to add first as you build your collection, not just because they are hardy and forgiving, but also because they require a lot of space. First of all, they get rather large (not the best choice for a nano tank). Secondly, they engage in a form of chemical warfare when competing against neighboring corals for space. 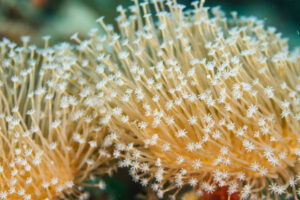 It’s true. Sarcophyton is well known to secrete noxious allelopathic compounds (such as sarcophytoxide), particularly when encroached upon by a nearby coral colony. Like most other soft corals, it lacks the powerful sting of its anemone and stony coral cousins; these chemicals compensate for that and give them a distinct competitive edge, both in nature and in captivity.

For the most part, these chemicals do not appear to be extremely poisonous. In fact, they typically only affect corals that are very close to the toadstool. That being said, many aquarists have blamed toadstools (and the chemicals they release) for serious water quality issues. And perhaps there is something to these claims; in a recirculating system that has little chemical filtration and receives few water changes, it’s entirely possible that these allelopathic substances can accumulate and cause harm.

The solution? Well, obviously, it’s probably a good idea to add (and frequently replace) a chemical filtrant such as high quality granular activated carbon. And change around 20% of the water weekly. Some further suggest installing a protein skimmer. These measures not only help you to control any secretions from toadstool leathers, but also help to maintain a healthier environment overall!