The aquarium hobby in general, and certainly the reef aquarium hobby in particular, has changed a whole lot over the years and decades. As aquarists master the husbandry of new species, some “classic” species might lose their luster. For example, where Xenia was once a beloved coral for its ease of care and pulsing behavior, some aquarists now disparage it as a “weed.” While numerous corals have been downgraded in this manner, there are others that some aquarists outright advise against keeping. Perhaps at the top of that list are the few species referred to as green star polyps (GSPs). But are they all that bad? 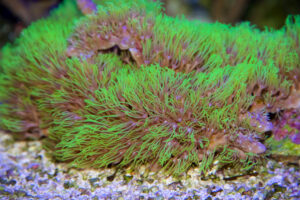 In years past, when reef aquarists had to work with crappier technology and a smaller base of collective knowledge, hardy corals were the rage. With its unusual degree of resilience and extra-fast rate of growth, the green star polyp Pachyclavularia violacea (or Clavularia viridis as it was known then) was once quite popular. Indeed, it very often was the first species kept by aspiring new reef aquarists of the day. However, starting around a decade ago, some hobbyists spurned its use, citing its aggressive or even “invasive” growth. The irony is that what once made this coral so desirable was later (at least in the eyes of some hobbyists) good reason to avoid it.

This left some of its closest cousins in Briarium (sometimes called starburst polyps or metallic green star polyps) in a good place. While only distantly related, these species very closely resemble P. viridis, particularly in their purplish base color, star-shaped polyps and bright green polyp pigmentation. On the other hand, they weren’t regarded as quite fast of growers. That, and they tend to grow somewhat vertically into big lumps, which slows their spread somewhat compared to the expansive sheets formed by P. viridis.

The branching star polyp (Briarium sp.) is almost identical to P. viridis. These so-called encrusting gorgonian genera are especially difficult to distinguish from each other when the fully expanded polyps obscure the base. In fact, the differences between them are so slight that some have suggested that all species in Pachyclavularia be reassigned as Briarium. Though not as a rule, the current Briarium species tend to be more branchy and gorgonian-like.

Briarium spp. occurs throughout much of the tropical Indo-Pacific Ocean as well as the Caribbean. It can be fairly common in some areas and grow in a wide variety of habitat types. In the Great Barrier Reef, it is abundant on the near-shore and can cover huge patches of reef. However, it seems to prefer turbid waters. In clearer waters, it is most often found on cliffsides or in deeper or shaded spots.

It typically forms thin, membranous sheets with clusters of knobs, finger-like lobes or bunches of tall branches. The basal layer (referred to as the medulla) is usually a lovely magenta color (less often a brown or purplish beige). The lobes of some species are hollow. The colony may grow over itself, forming bridges and crosshatches; these structures eventually bury the underlying polyps which are simply resorbed. Calyces form over surface, appearing as small bumps or taller, skinny stalks. Calyces are not as tall and skinny as in Pachyclavularia. There is only one type of polyp; polyps may retract completely within the calyces.

While it is likely capable of feeding on bacterioplankton, phytoplankton and both dissolved and particulate organic matter, it relies primarily on its zooxanthellae for sustenance. 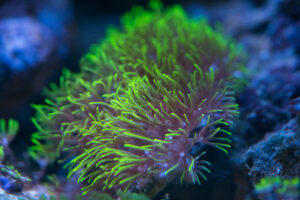 As with the “regular” green star polyps, the branching green star polyps are an excellent choice for first-time reef aquarists. It’s always a good idea to start out with hardier coral species, and this most certainly is one of the toughest and most forgiving. They ship well and are extremely easy to frag. They do not suffer from any particular diseases or pests. Branching GSPs thrive under almost any lighting or water flow and even under suboptimal water quality. That being said, moderation is best with Briarium. If using very intense lights, place them far from the source (perhaps on a vertical part of the hardscape, or even the back panel of the tank itself). Do not place them in the direct path of a strong water current.

While most claim that this coral is slower-growing than Pachyclavularia, it nevertheless should be placed in a spot where its expansion can be managed down the road (a large, lone rock on top of the sand bed for example). Wherever you decide to put it, give it lots of room to spread and bear in mind that it’ll grow at a faster rate than most of its neighbors.

And that’s pretty much it! You’ll be hard pressed to find a tougher species. Even so, it is one of the prettiest common soft corals in the trade. So, you’ll not only be trimming your colony in short time, but you’ll also have no trouble finding fellow hobbyists who want those frags! For any aquarist, and just about any kind of reef system, these beautiful corals are definitely a real treasure.