It is extremely simplistic to assume that larger fish inherently have more value. Sure, if you’re at the seafood market, that might make some sense. But when it comes to ornamental fish, size (and even coloration) get trumped by rarity. Rare fish come in all sizes. But less-encountered species understandably get the most attention, pull the most demand and therefore have the biggest price tags. Some of the biggest price tags indeed hang on the smallest fishes! Ironically, due to new demands created by the surging popularity of nano aquarium systems, smaller species often have more value.

Just take the Australian flathead perch (Rainfordia opercularis) for example. Sure, it’s a very, very colorful species. It is also rather cool and unusual in appearance. These things undoubtedly boost its value. But it’s also quite difficult to come by. This has made it a highly coveted fish in the ornamental fish trade for many years. Even into recent times, specimens have sold for several thousand bucks.

In the bass-like family Serranidae, big is the norm (think “groupers”). There are plenty of sea basses available in the aquarium trade, many of which are astoundingly beautiful. Yet, the relatively teeny flathead perch is one of the most prized serranids . This “holy grail species” has kept many collectors up at night. And finally, owing to the hard work of aquaculturists at Biota, it is now available as captive-bred. This article describes the species’ natural history and explains why these cultured specimens are the best for your tank (and worth every penny!).

Once believed to be endemic to Australia until it was discovered in the Raja Ampat Islands (Indonesia), Rainfordia opercularis is now known to occur broadly (though in very low numbers) in inshore waters of the southern Indian Ocean (especially the Great Barrier Reef). Its preferred habitat is shadowy caves and crevices on coral reefs. It is most often encountered in the northwestern and northeaster (though not north central) Australian coast. Its type locality is given as the Middle Island, Edgecumbe Bay, Whitsunday Passage, Queensland.

This is the only species in its genus. Without a doubt, the most unusual feature of this fish is the forward placement of its eyes and its wide mouth, which create the impression of a compressed head. Its coloration is nearly as striking as its shape. It has a dark orange base color with six light-purple stripes. The orange color is darkest in the center of the animal’s body, and fades to a fiery yellow over its back and belly. The stripes are highlighted by thin, black outlines. The first dorsal fin is transparent but for a golden yellow streak over each spine. The second dorsal fin has a dusky base and a yellow stripe along its edge; the edge is white with the rest bearing a rich rusty color. While the anal fin mostly resembles the dorsal fin, the pectoral fins and pelvic fins are light peach. A black, blue-edged eyespot graces the base of the tail which is orange-mocha with white edging along the corners. Overall, its colors intensify with age.

Its maximum size is only 5-7 inches length. 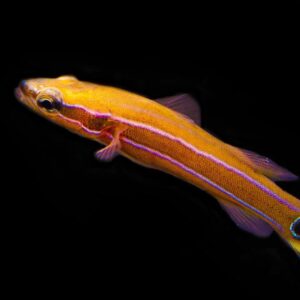 The Australian flathead perch is so rare that its captive care remains poorly defined. However, it is reported by the fortunate aquarists that have kept it as hardy and trouble-free in the aquarium. Perhaps the most frustrating thing about the species to aquarists is its shyness. Understandably, if you spend a couple grand on an aquarium fish, you’ll probably want to see it once in a while. While it’s true that a little bit of coyness is a nice tease, a fish that never comes out into full view kind of sucks.

That’s one big reason these captive-bred specimens from Biota are so sweet. Think about it… not only are cultured fish socialized to accept the close presence of other fish, but they are also accustomed to seeing the movement of humans outside of walls of the tank (especially at feeding time!). Therefore, they are not aggressive towards, or afraid of, their tankmates. And, they won’t cower in a dark hole every time their keeper approaches the aquarium. No, even these captive-bred specimens aren’t going to be pressed against the front pane of your tank begging for food like a pufferfish. But it will present just the right balance of shyness and boldness to exhibit its natural behavior without being a complete bore.

Moreover, as is usual with cultured livestock, it will be less likely to succumb to disease. Even though flathead perches are not very prone to illness, the extra measure of security is a great thing when you’re dropping this kind of cash on an aquarium fish.

As one might expect, this species appreciates a rocky aquascape with numerous shady hiding spots. It accepts most smaller-bite carnivore foods like frozen mysis shrimp. It’s not very picky about food, but a varied diet is ideal for overall health. It is not especially sensitive to water quality and, as mentioned earlier, is not highly susceptible to disease.

All-in-all, this is an easy-going, easy to keep rarity that is all flash and little effort. It does still cost a pretty penny, however. The difficulty of breeding/rearing the flathead perch in captivity will keep it somewhat rare for quite some time. But it’s a price worth paying, as it is a remarkable animal that is pretty hard to forget once you’ve seen it (usually just in photos). To keep one in the home aquarium is truly a privilege and we all have Biota to thank for the tremendous opportunity!