Every marine aquarist is well acquainted with the clownfishes (Amphiprion spp.). The most recognizable of the group are the ocellaris and percula clowns (A. ocellaris and A. percula). In addition to their wild types, these two species are additionally available to the hobby in myriad domesticated varieties. However, among the 28 or more described clownfish species, there are a few gems that are only rarely encountered. This is a bit odd, since since some of these rarities are exceptionally beautiful. One such example is the saddleback clownfish (Amphiprion polymnus Linnaeus, 1758).

This article takes a brief look at the natural history and aquarium care of this rather unusual species.

Traditionally, the saddleback clownfish (also known as the saddleback anemonefish or yellowfin anemonefish) has been listed as a member of the Saddleback Complex which also includes A. sebae and A. latezonatus. More recently, we’ve learned through genetic analysis that A. latezonatus has its own monospecific lineage. A. sebae differs from the otherwise quite similar A. polymnus in that it has a bright yellow tail.

The saddleback clownfish is found across Northern Australia to the Philippines, Indonesia, New Guinea and the Ryukyu Islands of southern Japan. It prefers sediment-rich inlets and lagoons of relatively shallow depth from 2-30 meters (6.6-98.4 feet). The species is active primarily during the daytime. It is often encountered living in close association with sebae anemones (Heteractis crispa) and carpet anemones (Stichodactyla haddoni). It can be highly territorial and may defend its host sea anemone aggressively, particularly against certain reef fishes such as butterflyfish which often eat the tentacles. As both anemones H. crispa and S. haddoni have a habit of burying themselves in the sand when stressed, the clownfish is frequently made to be vulnerable to predators.

The saddleback clownfish is variable in color. Some of these differences owe to regional variations; some are due to the animal’s apparent ability to change its color under different environmental conditions. The most encountered regional strain has a white head stripe and white mid-body stripe. The white head bar lies just behind the eyes. The mid-body stripe is usually saddle-like in that it tilts a bit to the back. The face, pectoral fins and ventral area are typically covered with a yellow or orange patch. (specimens from New Guinea can be more orange in the ventral area). Edging on the caudal and anal fins may have white highlights. Base coloration varies from orange to brown to very dark coffee brown. 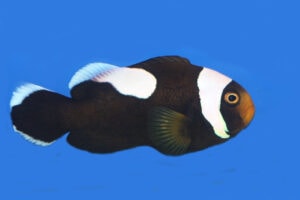 A. polymnus attains a maximum length of 13 cm (5.1 in). In any anemonefish group, the female is always larger than the male; that notwithstanding, in this species, the male is almost as large as the female. As with other clownfish, A. polymnus is a sequential hermaphrodite. This is a case of protandry, wherein the breeding male transforms to female when the breeding female dies; the largest non-breeder subsequently assumes the role of breeding male. While the female is largest, the breeding male is second largest with non-breeding males getting progressively smaller with lower rank. Some researchers propose that the near-equal size of males allows the fish to avoid predators more effectively in those moments when the anemone “decides” to shrink and drop into the sand bed.

The saddleback clownfish is a bit more finicky then its cousins. Perhaps it isn’t quite as touchy as the related A. sebae, but is certainly touchier than that bullet-proof tomato clown A. frenatus. For one, it’s an overall smaller clownfish and has a less robust build than some if its more damselfish-like cousins. Maybe it is also, for some reason, more sensitive to suboptimal water quality. It definitely may be more sensitive to stress, as it is necessarily more skittish; this can be expected of a species from open sand flats whose only source of protection can periodically deflate and disappear. In any case, when keeping this species in the aquarium, it is best to offer it lots of open space as well as rocky hiding places. It is also preferable to avoid keeping it with highly boisterous or pushy tankmates. When possible, add this species first so that it can become well-established and then stock other fishes. 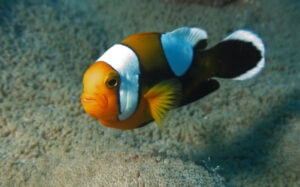 Undoubtedly, one of the best strategies for succeeding with more sensitive species in general is to obtain captive-bred livestock. Fortunately, farmed saddleback clownfish are now available from ORA. While wild specimens might take months to adapt fully to captivity, these cultured specimens are as hardy as can be. Even better, two color variants are available: The ORA Saddleback Clownfish is of the “standard” beautiful, dusky orange strain, whereas the ORA Black Saddleback Clownfish is of the darker, nearly black, strain with a yellow face and complete middle bar.

The saddleback clown is certainly one of the coolest clownfish to keep, and we are all so fortunate to now have these hardier farmed specimens available at a great price!