Certain fish species are considered to be “Holy Grails” in the marine aquarium hobby. These are hardly ever seen in tanks around the world and perhaps unsurprisingly come with quite a big price tag. Having one of these fish serves as a symbol of status–as well as a huge responsibility to ensure its best health, as most of these fish are very hard to obtain in the wild.

With any of these fish it is crucial to keep in mind that it isn’t smooth sailing once they make it into your aquarium. These fish once inhabited the ocean and will always require special and intensive care to keep them happy and thriving. They may be particular about water parameters, temperature and salinity levels. None of these fish are suitable for beginners or new aquariums due to their high sensitivity. As with any fish you plan on adding to your aquarium, you will want to make sure any new addition is suitable with its future tank mates. If there’s potential for them to fight with any of your current fish, it is best to find something else that will have no chance of causing any drama in the tank. A lot of these fish will still require live food in captivity and tend to be very particular about what they consume. Some of these fish may be seen in public aquariums around the world, allowing for a close look at rare and beautiful species that few of us can keep in our home aquaria. 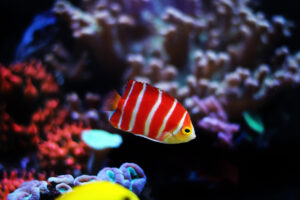 This first fish offers a stunning and vibrant red and white striped pattern that resembles a candy cane. The peppermint angelfish is known as one of the most expensive fish in the world with $30,000 being the highest listed price. And there is excellent reasoning for it! Collecting these fish requires a specially trained diver to reach nearly 400 feet down into the ocean. It is a hazardous situation as the diver only has a specific amount of time to collect these angelfish while avoiding decompression sickness. Not only does the diver have to keep an eye on their own personal health, they also have to ensure that the fish itself is properly decompressed. Matters do not get easier as these fish are not found just swimming in the open water. They reside around rock and coral and there is limited light once you reach such depth in the ocean.

Once these fish have made it to a holding facility, the next step of action is to acclimate them to captivity properly and to get them to eat. The acclimation process can take months as these fish are used to cooler water and minimal lighting. They need lots of coverage so creating multiple caves with your live rock is necessary to make these fish feel safe. It would be best to have live brine shrimp cultures on hand at all times so you will always have live food to offer this angelfish.

Peppermint Angelfish reach up to 3 inches in length. A minimum tank size of 55 gallons is recommended.

This next fish is more commonly found on ice sold as seafood than alive and ready for your aquarium. This is because they also have to go through proper decompression as they live 200-800 feet down in the ocean. There has only been a handful of these fish seen in the trade. They are definitely a showstopper with stunning coloration; they have yellow and white bars down their body with a black spot close to the dorsal and tail fin. As they get older and grow, their color will become even brighter.

Due to the complications in catching and acclimating this fish, they can reach up to $6,000 in price. It is actually common to eat Neptune groupers in Japan where they are usually caught with large nets. Unfortunately, due to how quickly the nets are raised up to the surface, the grouper usually dies by the time it reaches the surface due to decompression injuries. Catching them isn’t hard; it’s properly decompressing and acclimating them to captivity that becomes costly. Only 1-2 of these specimens are sold a year which truly shows the rarity of these beautiful fish.

The Neptune grouper can reach up to a foot and a half in size and a minimum of a 200 gallon aquarium is recommended. 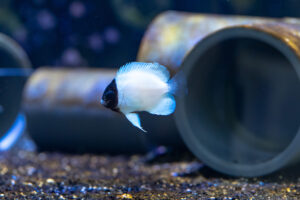 The female masked angel has an angelic white body with a beautiful black mask around its face and black stripe by their tail fin; the male has a yellow face with an orange rim around the body and a stunning lyretail. These angels are protogynous hermaphrodites (are all born female and the dominant ones eventually turn in to males). These fish are commonly found at over 300 feet deep in Hawaii and prefer much cooler water. For over a decade there has only been 1-2 of these fish collected annually, while in some other years none have been collected at all. They are an extremely rare sight in a home aquarium which is where their extravagant price comes in to play.

A masked angelfish can sell for $20,000 and are a prized catch for divers in Hawaii. However, this species may not be as scarce for hobbyists for much longer as it has been successfully bred in captivity. This has not occurred on many occasions, but with the extreme difficulty it takes to breed some saltwater fish, this is a great start to these angels being readily available in the trade.

Masked angelfish reach up to 8 inches in length. They require a tank of at least 80 gallons.