Hair algae is not just one of the common forms of nuisance algae, it is also among the most difficult to eradicate. Indeed, despite the numerous options for biological algae control (i.e. herbivores), few “go after” hair algae. Thankfully, the select group of reliable hair algae eaters includes the beautiful and fascinating tuxedo urchins.

The tuxedo sea urchin is found on shallow tropical reefs, rubble flats and seagrass beds throughout the Indian Ocean and the Western Atlantic Ocean from Indonesia to Southern China and Japan. It is known to be a keystone species in coral reef habitats as it facilitates growth of reef-building corals by grazing heavily on filamentous algae. Its taste for these problematic algae also makes it a highly desirable member of any reef aquarium clean-up crew. 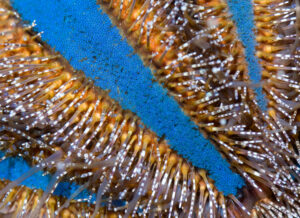 The blue tuxedo pincushion urchin (Mespilia globulus) is sometimes called the globe or sphere urchin. It sports five fat, dark bluish velvety bands. Its reddish counterpart (Mespilia cf globulus) is otherwise similar and just as attractive. Interestingly, the “red” variety has the same distinctive velvety blue patches; however, its spines have a much more reddish coloration. At present, the two are considered to belong to the same species. Both have very short spines, making them much safer and easier for home aquarists to handle. Both grow to around 7 cm in diameter. They get along just fine in groups; some hobbyists with larger systems enjoy keeping one or more of each color form for the sake of variety.

Tuxedo urchins (especially tank-bred specimens) are easily adapted to typical aquarium conditions. They are also surprisingly entertaining to watch. Most notably, they have a tendency to cover themselves in small items that they can pick up, including pieces of rubble, shells, seaweed, etc. It is not known for certain whether this is to armor themselves, to camouflage themselves, or for some other reason. Just know that they may pick any small object (including small frags or a thermometer) if it’s not glued down hard!

Where many snails, crabs, etc. won’t eat much (or any) hair algae, tuxedo sea urchins seem to relish it. Given that sea urchins are such well-known as herbivores to the average reef aquarist, it might be a little surprising how often they are overlooked in clean-up crews. Be aware though that they will eat nearly all varieties of macroalgae as well; even tougher, less palatable types such as chaeto are not necessarily safe around them. They therefore are not good candidates for the planted refugium!

Tuxedo urchin grazing activities are so thorough and so aggressive that they might leave visible scrape marks on the rock surface where they feed. They lodge themselves in crevasses or between rocks during the day. While not very active during the daytime, they “wake up” after dark and rove about the aquascape feeding on benthic algae. First-time sea urchin owners are oftentimes shocked by how much a single one of these creatures can eat in a single nocturnal foray.

Though it may take weeks to see a difference in algal coverage using other herbivores, tuxedo urchins leave small but distinctive scoured patches behind each and every night–until the hair algae is all but gone. Thus, they often require supplemental feedings in the form of dried algae or (better yet) offerings of live refugium macro in smaller tanks or where filamentous algae have been mostly consumed. After that point, it is highly recommended to supplement their diet with some sort of greens. Sinking algae wafers are just about perfect for this purpose, at least when material harvested from the ‘fuge isn’t available. 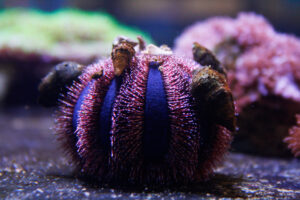 Green hair algae (or “GHA”) is a blanket term that refers to perhaps hundreds of species of benthic green filamentous algae. The only thing that they all have in common is that they are despised by aquarists. Prolonged battles against this scourge are common in the hobby, and sea urchins are proven to be an effective natural weapon to use against it.

Sure, there are a handful of sea urchin species available in the aquarium trade. Most of these are reef-safe, hardy and reasonably priced. But among them, the tuxedo urchin stands out as being extremely desirable. They are modest in size and so are useful in smaller tanks. Their spines are relatively short, reducing the chances of accidental injuries to the keeper. They are quite attractive as far as urchins go, and are even available in two different color morphs. And, unlike nearly all other sea urchin species in the trade, they are available as captive-bred!

Best of all, they don’t mess around when it comes to consuming hair algae. That’s a really good thing since GHA grows wicked fast and can destroy an otherwise gorgeous reef tank in no time. Go ahead and throw in the other herbivores—copepods, herbivorous snails and fish, certain crabs, etc. These animals will enhance GHA control since many of them can reach tight spots not reachable by the urchin. But for eliminating huge amounts of filamentous and other benthic algae fast, nothing works better than a tuxedo urchin.