Increasingly, aquarists are using planted refugia to conduct nutrient export and stabilize their captive ecosystems. Our ultimate macroalgae pack is one of the best ways to accomplish this. To be sure, there are other ways to control nutrients (carbon dosing, for example). Thankfully, these various means are generally compatible and complementary. However, the planted refugium has become a big favorite due to its numerous additional benefits (depending upon the macroalgal species), including their aesthetic value, the extra food source for large herbivores, the additional stabilization of pH (particularly when illuminated on a reverse light cycle), the creation of prime pod habitat, etc. There are thousands of macroalgal species in the wild, though only a handful of these are regularly available to reef aquarists.

In theory, planted refugia lock up excess nutrients and thereby (1) substantially improve water quality and (2) limit the growth of nuisance algae. While it’s true that macroalgae consume many of the same nutrients and trace elements as corals, they do so in more direct competition with microalgae, which have a considerably more negative impact on coral health. Think of it this way: The removal of good stuff by macros isn’t as bad as the removal of bad stuff by macros is good (follow that?). Basically, in the end, their impact is an overall desirable one–especially when you consider how easy it is to replenish the good stuff (trace element supplementation, for example).

Removal of the bad stuff (mainly excess nitrate and phosphate, to be specific) occurs when the aquarist harvests a portion of the macroalgae. Complete export is achieved only when the harvested material is thrown out; feeding simply recycles them (not that this is necessarily bad, as herbivores require algae in their diet and fresh macro is quite wholesome). And let’s not forget those less often discussed aspects of macroalgal nutrient recycling; they leach organic substances (amino acids, simple carbs, vitamins, etc.) which are taken up by various microorganisms (which in turn get passed up the food chain).

Thankfully, seaweeds tend to be fairly hardy and adaptable in captivity; after all, in most of our aquaria, they are very well fertilized! Perhaps the most common limiting factor for macro growth is light intensity and spectrum. Not that they’re all that picky; most grow well under modest 5,000K-10,000K lighting. Some even do well under regular ol’ household LEDs. However, specialized refugium lighting will generally give you the highest yield and allow for the largest seaweed beds.

For maximal nutrient removal, obviously you will do best with as large a macroalgal chamber as possible. This is also important as it will allow you to maintain as many different macro species as possible. This matters because each macroalga has different nutrient removing abilities. As the different species compete more aggressively for nutrients with each other, the more they compete with those undesirable micros. Of that veritable handful of popular aquarium macro species, AlgaeBarn includes the most useful (and complementary) in its Ultimate Macroalgae Pack. We here list the species in this combo.

Of the nine species from Chaetomorpha, the most common (and the one available in the ultimate macroalgae pack!) in the trade is C. linum. Its thick, scouring pad-like structure which makes it an ideal biogenic habitat for copepods. It also happens to be pretty efficient when it comes to nutrient export in captive systems. Not only does it grow rapidly but it also is easy to harvest in discreet clumps.

Known as sea lettuce, this naturally abundant seaweed is perhaps even more effective at nutrient export (plus your herbivorous fishes will love it!). Though it is also a chlorophyte (green algae), it differs dramatically from the chaeto in your ultimate macroalgae pack in shape with its soft, broad fronds. This species works the hardest when your nutrient levels are at their highest. Bear in mind, however, that this species does prefer very bright lighting and indeed requires it for its famously high growth rates. 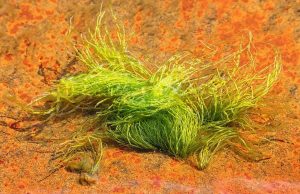 These rhodophytes (red algae) are comparatively slow-growing compared to the above. This is because they are adapted to typically deeper waters (i.e. less light) and so exhibit reduced metabolisms. Thus, they require less nutrients and consequently consume them at a lower rate than most chlorophytes. One of the faster-growing (and most beautiful) members of the genus is the red ogo, G. parvispora. Like sea lettuce, its freshly harvested material is a highly nutritious snack for all of your large herbivores.

The 5-Macro option for the Ultimate Macroalgae Pack includes a second species of Gracilaria: The pom pom, G. hayi. This species is more like chaeto in that its rigid structure makes a great home for pods. It does prefer stronger water flow; due to its simultaneously rigid and rubbery structure, it can withstand powerful currents. Fortunately, its shape and stiffness prevent bunching or compaction against drains. While it eventually can attach to hard substrates, this algae works just fine as a floating or tumbling mass (especially in a kreisle style tank).

This subtidal macro grows at a somewhat slower pace. And, it takes up nutrients at a more moderate rate. So, it won’t crash or go through boom-and-bust phases when subjected to occasional low nutrient availability. However, it also grows under moderately intense light. It can also tolerate some shading, and so might survive beneath partial cover by a small canopy of Ulva or Chaetomorpha.

Oh, one more cool thing about our Macro Pack: The 5-Macro option includes a mystery species!