If there was ever a group of fishes that was just about perfect for keeping in marine aquaria it is the neon gobies. These creatures are small, colorful, active and carry out some interesting and rather valuable duties. In addition to all that, they are extremely hardy and easy to care for.

The common name neon goby—derived from the bright horizontal stripes across their bodies—is often applied to all members of the genus Elacatinus. However, it is the type species for the group, E. oceanops, for which the name is usually reserved. There are currently 24 recognized species in the genus; some of these were named as recently as 2009. All members of the genus (with the exception of E. puncticulatus from the temperate East Pacific Ocean) occur in the tropical and subtropical West Atlantic Ocean from Florida down to Brazil. E. oceanops, which is now being raised in ornamental fish hatcheries, remains the most popular and most easily acquired neon goby in the marine aquarium trade.

One of the most notable things about many species in the group is their behavior as cleaner fish. These species will inhabit cleaning stations where they attract larger fish, which they “clean” of external parasites (even predatory fishes will refrain from eating the goby).  Neon gobies rarely venture more than a few feet away from their station. They are generally found in male-female pairs, and will engage in their cleaning activities together. They often attract the attention of their clients by dashing about and doing a little dance near the cleaning station. But it is the characteristic blue stripe that serves as the main signal to other fish that they are cleaners. This color pattern is seen in four of the six neon goby species (E. prochilos, E. evelynae, E. genie and E. oceanops) that act as cleaners. In fact, the greenish and/or yellowish striping seen in the other species primarily serves to help them blend in with the sponges in which they often live.

Though the majority of a wild individual’s food comes from cleaning in this manner, part of the behavior appears to be intended to avoid predation. Indeed, these gobies seem to be even more proactive in seeking the attention of potential predators. Elevations of cortisol levels that occur when these fishes are approached by predators indicates that they are not entirely trusting of their clients. However, once they feel reasonably safe, they will even go into a client’s mouth in their search for parasites. The duration of the cleaning depends mainly upon the density of parasites on the client. Though it is rather unusual, some neon gobies will “cheat” their clients by feeding on mucus and scales. This is thought to occur only when the goby is extremely hungry and the client has few parasites to pick. Neon gobies do not resort to cheating often, as it tends to result in the client learning its lesson and not returning to the cleaning station.

Neon gobies adapt to life in captivity quite well. They are less likely to die in shipping than many other marine ornamental species. Moreover, they are less finicky about water quality than many other saltwater aquarium fish species. Though they tolerate a broad range of water temperatures, a tropical environment (upper 70s Fahrenheit) seems to be best. These fishes only reach about an inch in length, and so will not outgrow even the smallest of tanks; a volume of ten gallons or more per individual is adequate. They may establish a cleaning station in the aquarium, but will nevertheless still appreciate a small hiding place such as a little cave or crack in the rockwork. In some cases, an individual might not be seen for days, only to suddenly pop out of a hiding spot. They are by and large an active but peaceful fish, so compatibility is not often an issue. Males might scrap with each other a bit, but neon gobies tend to get along with their tankmates well. Though they are known to supplement their own diet a bit with algae, they are completely reef-safe and do not eat or otherwise bother corals. Captive specimens will readily clean their tankmates, but easily get by with a good variety of meaty foods; small live foods such as Nano Brine and Tig Pods are especially appreciated. With clean water and a good diet, their lifespan in captivity is usually around 12-18 months.

Where enough space and hiding places are provided, neon gobies can be kept in small groups. This helps to ensure a good balance of male and female individuals. Though neon gobies are sexually dimorphic, the differences between sexes are very subtle and are dif 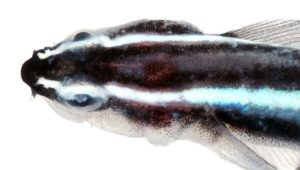 ficult for even an expert to determine at a glance. At least some neon goby species are capable of protogyny, where female organs develop or mature before the appearance of male parts. In some cases, males will abandon their partner for a larger female. If healthy, neon gobies will readily spawn in captivity. A mass of tiny eggs is laid over a hard surface (typically a flatter area on a rock). Though their young cannot be raised without specialized foods and special care, it is pretty interesting to be able to observe their courting and breeding behaviors.

Really, neon gobies (especially THE neon goby E. oceanops) are a must-have fish for just about any sort of marine aquarium. Because they are so adaptable to aquarium conditions, they require no special care from their keeper. They play well with others, so there usually is no concern about injurious aggression. They may even be kept safely with many large, predatory fishes such as grunts and groupers. Additionally, even though they may feed on parasites (not a bad perk!), they will accept just about any kind of aquarium fish food. Their miniscule adult size allows them to be maintained in smaller aquarium systems. They are now available as captive bred specimens. And, they undoubtedly sport some of the brightest blue coloration seen among marine aquarium fishes.

2 thoughts on “Petite and Pretty: A Look at the Neon Goby (Elacatinus spp.)”