Perhaps it is a poor choice of words to say that ones tank “is cycled” in the past tense–as if the keeper no longer needs to monitor and control dissolved inorganic nitrogen in the system water. Indeed, establishing a biofilter (establishing populations of nitrifying bacteria) can be a lot easier than controlling the accumulation of nitrate. While there are numerous means of removing excess nitrate (e.g. chemical filtration, water changes), the surest and least costly methods include biocontrol (establishing populations of denitrifying bacteria).

This article focuses on denitrifying bacteria, the process of denitrification and environmental factors that favor denitrifiers.

In its essence, denitrification is a microbial process in which nitrate (NO3−) is reduced (through a series of intermediate gaseous nitrogen oxide products) into molecular nitrogen (N2). Denitrification is carried out by certain anaerobic bacteria as a form of respiration. Living in a habitat that is devoid of oxygen, these microbes reduce oxidized nitrogenous compounds in response to the oxidation of an electron donor (e.g. organic matter). In order of most to least energetically favorable are nitrate, nitrite, nitric oxide, nitrous oxide. The final product is dinitrogen gas (N2).

The whole process can be expressed as a net balanced redox reaction where nitrate (NO3−) gets fully reduced to dinitrogen (N2): 2 NO3− + 10 e− + 12 H+ → N2 + 6 H2O. However, several enzymatic pathways are known to be involved in the reduction process. Rather than occurring in a single step, denitrification is a series of half reactions (the enzymes catalyzing the reactions are here shown in parentheses): 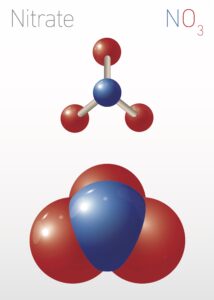 Denitrifying microbes characteristically prefer microaerobic and anaerobic conditions (environmental concentrations of less than 10% saturation). They generally are heterotrophic, utilizing organic substances for energy. Denitrifiers are represented in all main phylogenetic groups. Examples include Paracoccus denitrificans and Thiobacillus denitrificans. Generally several species of bacteria are involved in the complete reduction of nitrate to N2, Some genes known to be responsible for denitrification include nir (nitrite reductase) and nos (nitrous oxide reductase) among others. Such organisms include Alcaligenes xylosoxidans, Alcaligenes faecalis, Bradyrhizobium japonicum, Blastobacter denitrificans and several in Pseudomonas.

These organisms occur in terrestrial, freshwater and marine oxygen-depleted habitats. Here, nitrate or nitrite can be used as a substitute terminal electron acceptor instead of oxygen (O2).

Denitrification does occasionally take place in oxic environments (usually via certain Gram-negative bacteria in the phylum Proteobacteria). Paracoccus denitrificans for example can perform denitrification under both oxic and anoxic conditions; when exposed to oxygen, it utilizes nitrous oxide reductase to catalyze the final step of denitrification.

Promoting denitrification in the aquarium 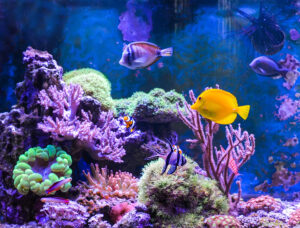 As we saw in the previous two articles, nitrate is produced through the activities of ammonia-oxidizing and nitrite-oxidizing nitrifying microbes. This is, of course, a good thing because ammonia (to a large extent) and nitrite (to a lesser extent) are toxic to most marine animals. However, nitrate itself presents some issues as it accumulates. For example, above 50 ppm, it tends to interfere with the growth of animals at a cellular level. Also (as so many of us have before witnessed ourselves) it acts as a nutrient for plant growth and therefore encourages the proliferation of many types of nuisance algae. To say the least, it is a good idea to control runaway nitrate accumulation.

Natural filtration methods that rely on denitrification vary greatly but always are centered on providing a suitable (i.e. anaerobic) living space for denitrifying bacteria. The first attempts to culture these microbes were outside the main tank in so-called denitrifying filter. These flow-through devices consisted of a water-tight, air-tight box. A water valve controlled flow rates through the unit. A second, one-way air valve allowed for the escape of nitrogen gas. The unit was filled with some sort of high-surface area biomedium and fed an organic carbon source such as lactose. These things kind of sucked because they were ticking time bombs. Specifically, if you fed them too slowly the bacteria could start to convert nitrate back into nitrate; if you fed too heavily, they start to produce hydrogen sulfide. Unsurprisingly, they fell out favor among aquarists before they were ever widely put into use.

And that should be just fine, because there’s really no reason that one couldn’t grow these organisms right in the main tank, naturally, in various anoxic areas. This could be in several spots including a reasonably deep sand bed, large chunks of highly porous biomedia such as MarinePure or even in a big filter sponge dropped into sump in an area of low flow. For systems with low levels of dissolved organic matter (DOM), it may be advantageous to dose acetate or ethanol.

Thankfully, one does not need to count on the presence of resident denitrifying species to set the process into action. At least two live products (PNS ProBio and PNS Substrate Sauce) include denitrifying species. The cultures can be poured right into an appropriate biomedium for faster and surer inoculation.

Undoubtedly, the biocontrol of nitrate has gotten easier with advancements in refugium keeping over the last few years. But the smart use of denitrifying bacteria certainly helps to maintain proper nitrate levels. And that’s a good thing, since we generally love to feed our corals and fish generously. You cannot beat the ease and cost effectiveness of natural biocontrol, and denitrification is one excellent biocontrol tool that anyone can use!