Many aspiring reef aquarists are a bit intimidated by SPS (small-polyp stony) corals. This is not without good reason; generally being more particular about water flow, lighting and water chemistry, they are well within the realm of the advanced aquarist. But we say “generally” in this case because there are some exceptions to this rule (there are are exceptions to everything, right?). Among the most notable exceptions here is the well-known genus Pavona. It can go by many names (often denoting growth form) such as Pavona Coral, Lettuce Coral, Potato Chip Coral or Cactus Coral. 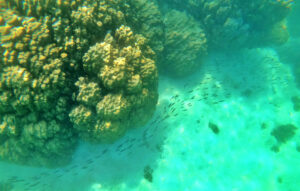 Pavona corals (family Agariciidae) include a diverse but nevertheless highly recognizable group of colonial small-polyp stony stony corals. They occur in shallow waters of the tropical Indo-Pacific Ocean (mainly Fiji, Tonga, Solomon Islands, and the Great Barrier Reef but also the east African coast, the Red Sea, and the northwestern Indian Ocean). Just about every growth form is represented in this genus including massive, meandering, columnar, plating and leaf-like shapes. In fact, there is much variation within individual species depending upon water movement, light conditions, depth, etc.

While Pavona species can sometimes be hard to distinguish from one other, they clearly stand apart from other coral genera by lacking corallite walls (instead bearing septocostae that connect each corallite to its neighbor). Typically, the polyps only extend at night. While it can rely entirely on the products of its symbiotic algae for nutrition, Pavona is quite capable of pulling plankton (including zooplankton, phytoplankton and bacterioplankton) as well as dissolved organic substances (e.g. amino acids) directly from the water column. In fact, regular feeding is widely reported to benefit these corals.

This genus is considered to be among the easiest of SPS corals to keep. Fast-growing, a single frag can grow to form a huge colony in relatively little time. Especially compared to other SPS corals, Pavona seems to favor moderate lighting and isn’t quite as finicky with respect to spectrum, photoperiod, etc. Nor will it dramatically change color like some other SPS coral types. Indeed, extremely intense illumination can bleach this coral (so don’t put them directly beneath powerful lights!). With this in mind, it is a good idea to extend the acclimation period when adapting a new pavona coral to a brightly lit tank.

More like their fellow SPS types, strong water movement is recommended for pavona corals. Pavona very much prefers chaotic to laminar flow patterns. Many hobbyists appreciate the flower-like patterning of the coralites as well as the “texture” of the “fuzzy” polyps that shake with the passing currents. With these corals, it is especially important to keep detritus from settling and accumulating on the colony; small piles of participate organic matter can cause underlying spots on the colony to die off. We especially see this in the vase-like growth forms. Therefore, while these corals are not super sensitive to imperfect water quality, they do appreciate an environment that is more or less detritus-free.

Of course, as they are stony corals, it is pretty important to maintain a calcium concentration of 400-440 ppm at all times. Along the same lines, be sure to keep the pH and alkalinity within the normal range as well! Oh, and as always, watch for those pesky aiptasia anemones, especially on the undersides of the colony. 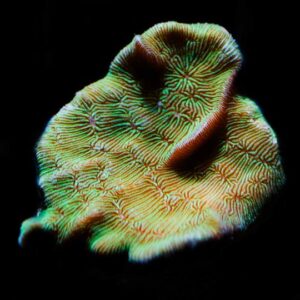 The hardiness of Pavona (at least for an SPS coral) makes it a great first selection for any new venture into SPS keeping. Just give it lots of space to grow into and be mindful of its sweeper tentacles when placing other corals around it.

Widely available, fast-growing and easily fragged, pavona corals are generally fairly inexpensive. There are, however, some brightly colored strains (usually green) that command slightly higher prices. Take for example the Biota Mint Pavona (Pavona frondifera). This particular strain originated from the renowned reef aquarium expert Julian Sprung. It is an unusually delicate, thin and leafy variety of Pavona. Unlike its more robust relative Pavona cactus, the Mint Pavona grows in a rather frilly, yet compact, colony. Its famous mint green coloration is best enjoyed under lights that are heavy in the blue end of the spectrum. This strain is ideally placed in an area of reduced lighting and water flow (save those spots for your more typical SPS species such as Acropora!). A more “chill” environment such as that enjoyed by acans, scolies and chalice corals is most fitting for this strain.

For sure, pavona corals are one of your best choices to test your hand at building an SPS reef community. Captive-propagated specimens (such as the Mint Pavona) are especially forgiving of beginner SPS enthusiasts. Thus, these canaries-in-the-mine corals may be invaluable as you make your first move into small-polyp stony territory! But as attractive as Pavona can be, you just might find yourself still loving these distinctive corals long after you’ve become an SPS master.