You are here: Home / Copepods / How Often Should I Add Copepods to the Reef Tank?

A reef tank is a complex system with a lot of different components. All these moving parts must be fully functioning for the ecosystem to survive. Copepods play a crucial role in this system. Copepods are consumers in the aquatic food web. They also devour the smallest forms of microalgae. So, they are super helpful in keeping the reef tank clean! However, many reef keepers might not know how often to replenish the copepod population. That is one of the questions we will discuss in this article!

Why Should We Add Copepods?

If you have fish like a Mandarin Dragonet (Goby) or a Leopard Wrasse, adding live pods regularly is a great idea. Biota’s captive bred Mandarins are far less picky eaters and are willing to accept other foods, but they do thrive on live pods. We can create and preserve a robust copepod population to help support these fishes. With the right equipment, even a modest sized refugium will fit the bill.

If stocking a refugium with macroalgae and plenty of live rock, you may not need to replenish copepods very often. Keep a close eye on the population. They are usually observed crawling near the substrate. If they are visible on the glass or substrate and the fish look healthy, that is a sign of a dense copepod population. However, in the event of a power outage or a disruption to the system, it would be wise to add a population boost. Many reef keepers feel most comfortable with using our EcoPods subscription.

What Exactly Are Copepods?

Copepods are tiny crustaceans found all over the world! They are an essential part of the ecosystem. They serve two vital purposes in the reef tank. First, the assist in reducing detritus and film algae. Second, they are a very nutritious source of food for reef tank inhabitants.

Copepods are one of the smallest members of the clean-up crew! their diet is their sole They have an often-overlooked role in cleaning up film algae. When this algae accumulates, it is most likely too small for the more prominent clean-up team members to remove. Copepods perform this task very well! When it comes to feeding copepods, you may need to supplement their diet at times. To avoid starvation, we recommend adding OceanMagik live phytoplankton to the reef tank on a regular basis.

Remember, pods serve two purposes in reef tanks. First, they are part of the clean-up crew. Second, they are on the menu! Copepods’ nutritional worth get dispersed throughout the reef tank. After the fish have eaten them, the next creatures in the food chain will receive nutrition through the waste product. In addition to benefiting from the fish waste, some corals are capable of capturing and consuming copepods. 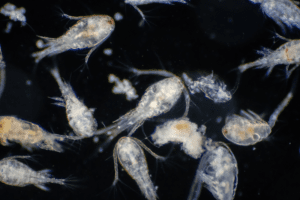 When to Add Copepods to a Reef Tank?

It’s never too late to add copepods to the system. The exact time to seed a new tank with pods isn’t written in stone. However, to get started as soon as possible, add copepods after the tank has cycled. If adding the copepods as soon as there is water in the tank, they may not survive any ammonia and nitrite spikes. Chances are that pods have already been introduced with macroalgae, rock or substrate. Copepods can then be replenished throughout the first several months of establishing a new system.

How Do We Acclimate Copepods?

It is a straightforward process to introduce live pods. To begin, ensure that the tank has completed cycling and has a layer of sand or substrate. With live rock, substrate, and all necessary equipment, the reef tank should appear to be ready for the addition of fish and invertebrates. If the pods are being added to the refugium, the macroalgae should already be in place. Remember, tiny copepods seek shelter in the tangles of macroalgae.

Although they are tough, copepods do get stressed upon introduction to a new system. Pods should be introduced at night; this allows them to avoid being eaten by a predator. They do need to be temperature acclimated. This can be done by floating the jars in the tank. The next step is to shut off the flow of water in the tank. This will prevent any pods from being swept into an impeller or moved from the refugium to the display. With the lights off, pour the contents of the jar into the water. After half an hour or so, the pods should be settled in, and the pumps and lights can be turned on again.

Is It Necessary to Feed Copepods?

Copepods are an excellent food source for fish and inverts in the reef tank. But copepods must be well fed to provide the best nutrition source possible. The nutrition of the pods will affect the health of the creature that consumes them. Most reef tanks will have a consistent supply of detritus and film algae. In most cases, this is sufficient to sustain copepods. Well-fed copepods are a very nutritious food source for the other critters in the reef tank system. But we now know more about the benefits of feeding live phytoplankton. Dried phytoplankton products exist, but they lack the full nutritional profile that copepods need. Copepods are herbivorous and they rely on filtering phytoplankton from the water.

Possibly the easiest way to tell if the copepods need supplemental feedings is by monitoring the population. This can be done at night or during a period of darkness. The water flow can be turned off as well, so the water column sits very still. After a few moments, shine a flashlight into the water. The copepods should be observed on the glass and swimming in the water column. We would not suggest doing a headcount, but this will give some idea of how the population is faring.

Copepods are an essential part of the reef tank ecosystem. Building a robust population of pods has benefits for the reef’s inhabitants as well as the entire system. It is good practice to boost the pod population by adding live pods to the system on occasion. We suggest 5280 Pods to boost the existing population. Also, we want to ensure that the copepods have a stable food source. In addition to the detritus and algae produced in the reef tank, they might need supplemental feedings. Adding OceanMagik live phytoplankton to the maintenance routine, helps to keep the population growing. Remember, pods are food for fish and corals, improving their nutrition benefits the rest of the system.