You are here: Home / Product Info / Why EcoPods are the Best Live Copepod Product Ever

Earth is a planet of pods. Wherever there is water, there are amphipods, isopods, branchiopods, and so on. Pods are an integral part of pretty much every freshwater, brackish and marine ecosystem. But even among all these big players, the tiny copepod is a giant; in terms of both biomass and sheer number, copepods (subclass Copepoda) are the most abundant and ubiquitous animal on the planet.

As a matter of fact, many habits (especially highly dynamic environments such as coral reefs) are home to multiple copepod species. Members of these copepod communities rub shoulders often but nevertheless avoid intense competition through niche partitioning; that is, they each specialize at exploiting very specific resources.

You could say that each species lays claim to its own territory and its own trade. Therefore, some might settle on the seafloor as adults, whereas other remain in the plankton. Some focus on grazing algae whereas others target particulate organic matter. The larvae of some copepod species may even claim a temporal niche, reserving their peak levels of activity to times when their larger cousins are inactive and therefore less likely to prey on them. 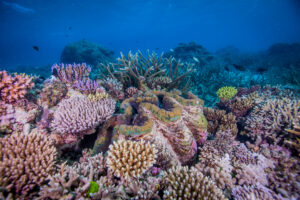 As in Nature, the best live copepod product for most aquaria is a multi-species product. With all of the basic ecological roles of copepods in mind, AlgaeBarn has developed EcoPods. This revolutionary all-in-one seed culture contains four distinctly different but complementary copepod species–the widely popular Tigriopus and Tisbe as well as the lesser-known Apocyclops and the even harder to find Oithona.

All four copepod species in EcoPods help to control detritus and film algae, enhancing the performance of any clean-up crew. Their tiny larvae provide a natural prey item for zooplanktivores such as corals whilst the adults are preyed on by small fishes such fairy wrasses, dragonets, seahorses, anthias, etc.

Still, the differences in size and habit of each copepod species in this product produces better results than any one or two or three species alone. Indeed, this balanced community of copepods promotes a natural transfer of nutrients and food energy across the entire aquarium food web! We below describe how each species in EcoPods plays their part.

These large copepods frequently jump into the water column, jerking around as and making themselves a conspicuous target for small fish. Rich in essential amino acids and omega fatty acids, Tigriopus makes a nutritious meal for the most finicky aquarium planktivores. The species additionally contains high concentrations of carotenoids which can enhance and brighten the colors of your fish and coral. It is a useful cleaner pod as it effectively removes nuisance film algae from live rock.

Tisbe, smallish even for a copepod, is a great coral food. But it is especially good at cleaning up the tiniest crumbs of detritus and algae. These miniscule pods occupy cracks and crannies in the substrate, rock, macroalgae, etc. In addition to its ability to hide, its nocturnal habit prevents it from getting decimated in a densely stocked marine aquarium.

Apocyclops spends much of its adult life swimming in the water column, where it is highly vulnerable to fish predation. In addition to its general hardiness, its high reproductive rate allows it to maintain a long-term presence in most aquaria (this live copepod lays eggs every 4-6 days, about twice the rate of Tisbe and Tigriopus!). Apocyclops is midsized and quite wholesome being rich in protein and amino acids.

Oithona is a widely-occurring marine copepod that typically inhabits shallow coastal waters. It produces very small (45 microns) nauplii and exhibits a weak escape response, it therefore is well-suited as prey for many coral species. It feeds on relatively tiny foods including bacterioplankton, phytoplankton, the smallest protozooplankton and microscopic bits of suspended organic matter; thus, it cleanses the water column and converts microplankton (including microbes targeted by carbon dosing) into a nutritious live coral food. 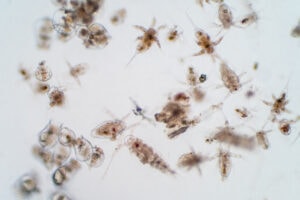 EcoPods help transform your aquarium into a fully functional marine ecosystem. This product contains a wide size range (juvenile to adult) of live copepods. Though juveniles are very difficult to see with the naked eye upon arrival, they are ideal for establishing permanent copepod populations. Why? Obviously, this is partly because older pods may only have a few days left to live. But this is also because fish do not completely consume them (they can barely see them) immediately after you add them into your tank! All four pod species are 100% viable to reproduce in marine aquaria.

We strongly suggest using EcoPods with our high-quality OceanMagik live phytoplankton blend to build and maintain a robust live copepod population; for a complete reef food package that supports and nutritionally enriches your pods as well as your corals and many other filter-feeding inverts, upgrade to the Ultimate Ecopack!

Everything You Need to Know About OceanMagik

Whether you're a regular here at AlgaeBarn or a newcomer, we always get tons of questions about live phyto. So, we thought, there’s no better way to answer

Read More about Everything You Need to Know About OceanMagik

Is Sea Lettuce a Good Macroalgae for the Refugium?

If you are looking for a way to control nutrient levels in the reef tank, macroalgae is a great way to do it! You may have heard about one of the fastest

Read More about Is Sea Lettuce a Good Macroalgae for the Refugium?